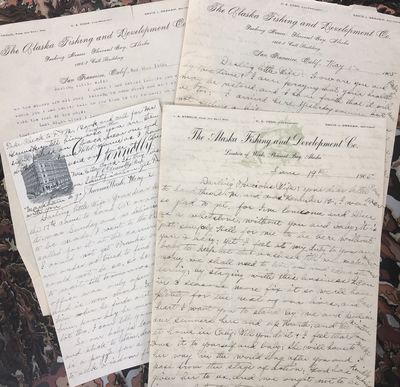 by Cook, C.E.
Very Good. A collection of letters from the vice president of the Alaska Fishing and Development Company written to his endearing wife. This collection includes 38 letters from Clair Cook (C. E. Cook) to his wife, Ella Cook, plus 6 letters addressed to "Ella" or "Sister" from various family members. Letters are on sheets measuring 6" x 9 ¼" or 8" x 10"; two letters are typed, the rest are ALS. All are dated between 1904 and 1905. 16 on Alaska Fishing and Development Company letterhead; 18 on Hotel Donnelly, Tacoma, Washington letterhead; 1 on American Fish Company letterhead; 1 on St. Helena Sanitarium letterhead; the remaining letters are on plain sheets. Overall very good with light toning and foxing, and a few letters have minor chipping along edges, not affecting content. About 16 of the letters mention Clair's business dealings, most are vague and discuss his travel plans, and limited to a few lines. But 7 or 8 of these letters go into detail about the ships used in the business, tonnage of fish caught and market prices, and the company's stock. In a letter written from Pleasant Bay, Alaska on June 2, 1904 Clair writes of 10 tons of Halibut, ready for market; June 19th, 1905 he writes about a visit from "Mr. Stroud" the president and general manager of the company, and also about the selling and buying of shares in the company stock; and on May 27th, 1905 he writes of the Treadwell Mines in Alaska sending ore to a smelter, likely in Tacoma, WA. On June 28th, 1905 Clair writes "We got up steam and pumped the water out of the ship today, trimmed the ship and secured cargo so it would not slide[? ] while crossing Queen Charlotte Sound; it sometimes gets a little rough there" All of the letters written by Clair show his incredible devotion to wife. Each letter starts with "Dearest little wife," "Darling precious wife," or "Darling loyal heart", and are filled with Clair's exclaims of ardent love, the pains of separation, and his wish to be home with his wife and little daughter in California. Although the letters mostly discuss love for his wife, the timing of the letters is important. Written just after the Klondike Gold Rush (1896-1900) and when commercial fishing and canneries were becoming increasingly popular along the Alaskan coast, these letters demonstrate an interesting perspective of the development of the last frontier. The details of daily life of an officer of a growing fishing company, the attractive letterhead, and the quantity of letters make this collection important to researchers and historians of American fisheries and the Alaska Territory. . (Inventory #: 020033)
$1,200.00 add to cart Available from
Back of Beyond Books
Share this item