SERVICES AT THE ORDINATION AND INSTALLATION OF REV. PHEBE A. HANAFORD; As Pastor of the First Universalist Church, in Hingham, Mass, Feb. 10, 1864, Phonographically reported by Rev. Wm. Garrison Haskell. Sermonds by Rev. John G, Adams, and Rev. Olympia Brown 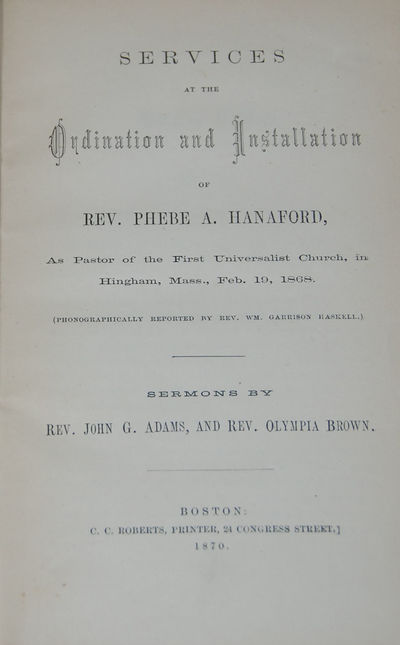 by (OLYMPIA BROWN- REV. PHEBE A. HANAFORD)
Boston: C. C. Roberts, 1870. First Edition. 8vo, pp. 71. Bound in original cloth that is bright and clean, stamped in blind and gilt. Later bookplate on the end paper, contemporary ownership (Namie M Bond) on the blank. A fine copy. Scarce. Olympia Brown's sermon: "Land of Fellowship" covers 3 pages. Born in Kalamazoo, Mi., Brown was a Universalist minister and woman suffragist. She studied at Mt. Holyoke and Antioch. She was the first woman to be ordained by full denominational authority. In 1866, she became a charter member of the American Equal Rights Assoc. and a founder of the N. E. Woman Suffrage Assoc. In 1878 she moved to Wisconsin and became President of the Wisconsin Woman Suffrage Assoc. She remained President until 1912. She traveled throughout the state organizing suffrage clubs. Hanaford was a Nantucket native. Born a Quaker, in 1866 she became the first woman to be ordained in Massachusetts when she was called to the First Universalist Church in Hingham. Thereafter she served several New England churches. She was active in the temperance and suffrage movements, and wrote copiously for periodicals, as well as publishing ten books, among them a biography of Lincoln. (Inventory #: 59365)
$385.00 add to cart or Buy Direct from
Second Life Books
Share this item