ACQUAINTANCES, OLD AND NEW, AMONG REFORMERS 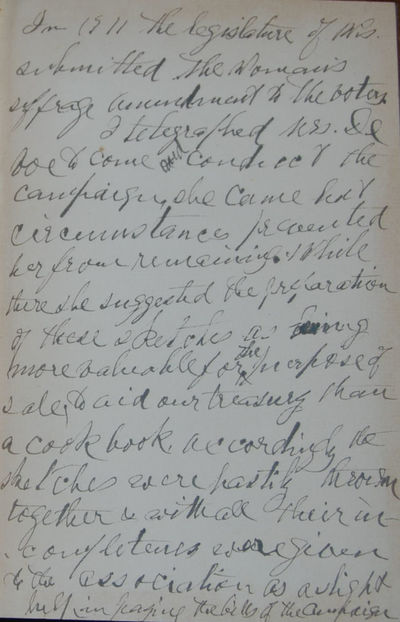 by BROWN, Olympia
[Milwaukee: by the author], 1911. First Edition. 8vo, pp. 115. Gray cloth, illustrated with photos, a very fine copy. Krichmar 4542. Rare. OP. On the front blank end paper, Brown's holograph describes how this book came to be written: "in 1911 the legislature of Wis submiited the Womam's suffrage amendment to the voters. I telegraphed Mrs. DeVoe [Mrs. Emma DeVoe] to come and conduct the campaign. She came but circumstances prevented her from remaining & while there she suggested the preparation of these sketches as being more valuable for the purpose of sale, to aid our treasury than a cook book accordingly the sketches were hasilty thrown together & with all their incompleteness ever given to the associaiton as a slight help in paying the bills of the campaign." Signed on the verso of the frontisportrait: "Olympia Brown | 941 Lake Ave | Racine, Wis" Born in Kalamazoo, Mi., Brown was a Universalist minister and woman suffragist. She studied at Mt. Holyoke and Antioch. She was the first woman to be ordained by full denominational authority. In 1866, she became a charter member of the American Equal Rights Assoc. and a founder of the N. E. Woman Suffrage Assoc. In 1878 she moved to Wisconsin and became President of the Wisconsin Woman Suffrage Assoc. She remained President until 1912. She traveled throughout the state organizing suffrage clubs. This is an account of the Brown's work for the cause of woman suffrage. (Inventory #: 59364)
$2,750.00 add to cart or Buy Direct from
Second Life Books
Share this item