BRING ME YOUR LOVE. Illustrated by R. Crumb. 1/26 Signed by Both 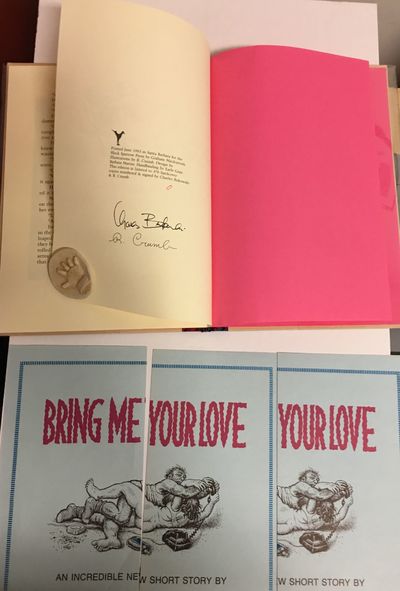 by Bukowski, Charles
Santa Barbara: Black Sparrow Press, 1983. One of 26 Lettered Copies. Hardcover. A nearly fine copy with a very good plus acetate wrapper (with minor scratches). R. Crumb. 4to. Copy 'O' in the deluxe binding (with a red, black, green, blue, and purple patterned cloth backstrip) signed by both Bukowski and R. Crumb on the colophon page. This hardback edition consisted of 376 copies, printed in June of 1983 (there was also a paperback issue). Design by Barbara Martin. Handbinding by Earle Gray. A short story by Bukowski. A filmed version by David Morrissey stars Ian Hart as the journalist bringing flowers to his wife in a mental hospital. The 2008 album of the same title, by City and Colour is named after the story. (Inventory #: 14347)
$3,500.00 add to cart or Buy Direct from Ed Smith Books
Share this item

THE SPY WHO CAME IN FROM THE COLD

New York : Coward McCann , 1964
(click for more details about THE SPY WHO CAME IN FROM THE COLD)

New York : Random House , 1939
(click for more details about THE DAY OF THE LOCUST)
View all from this seller>