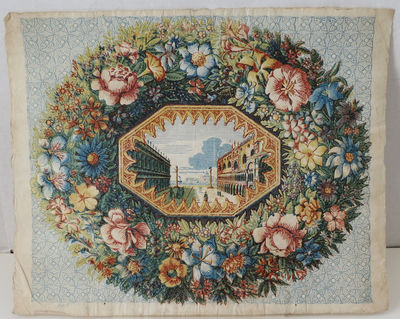 by Remondini & Rizzi.
18th century & later. . Full sized, unused sheets. Six of the papers are known or presumed to have been printed by the Remondini factory. Three are later printings by Rizzi from the original Remondini blocks and bear the Stampa Remondiniani PESP blindstamp. Most in very good condition. The stars of the group are a matched pair (each 16 x 13 inches): Remondini's view of Venice surround by a large bouquet on a blue diaper pattern background, along with its Rizzi recreation. There are 3 Remondini bookbinding papers (17 1/2 x 14 1/2). Two sheets of Remondini wall paper (21 1/2 x 17 1/2). These have some fraying and are in good condition. There are 2 more Rizzi PESP recreations of binding papers. Full, unused papers such as these are rare. The papers were printed on a hand press, using vegetable dyes (probably in paste, rather than ink) on wood blocks; sometimes with copper pins or strips mounted on them for tiny details. A different block was cut for each design and for each color. The papers were typically stored folded in half. When a paper has two identical images with a narrow space between, it was meant to be cut in half.Remondini, establishing his printshop in Bassano in 1649, was soon renowned for his wood block and copper prints and block-printed papers. He dominated the c18 market, employing a thousand persons, with 38 printing presses, a paper mill, die foundry, and a trade school of woodcarving. When the firm closed in 1861, about a thousand of the old blocks were rescued by a group of 4 enthusiasts: Pasoli, Esengrini, Suardi, and Ponti (hence the P E S P stamp). They granted Giuseppe Rizzi of Varese a license to print them—if he used the original methods. The last Rizzi died in 1939. As part of the nobles’ bequest some 400 remaining woodblocks were given to the Museo Civico in Bassano. (Inventory #: 18336)
$8000.00 add to cart or Buy Direct from
Veatchs Arts of the Book
Share this item

The Veatchs Arts of the Book

Satisfaction is quaranteed. Libraries may use purchase orders, and are billed according to their requirements. 30 day return guarantee, with full refund including shipping costs for up to 30 days after delivery if an item arrives misdescribed or damaged.
More from this seller

OF WOODLAND POOLS, SPRING-HOLES & DITCHES. Excerpts from The Journal....

MODERN CABINETS, FURNITURE AND MATERIAL FOR PRINTERS. Catalog No. 14.