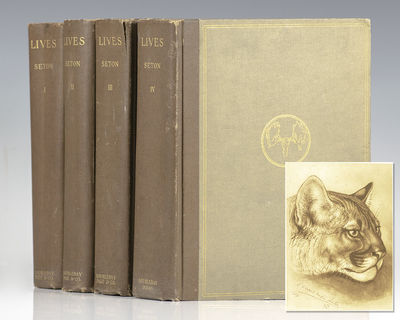 by Seton, Ernest Thompson
Garden City, NY: Doubleday, Page, 1925-28. Signed limited first edition, number 95 of only 177 sets, of Seton's illustrated zoology of "land animals in America, north of the Mexican border," with 1,500 illustrations and 50 maps showing distribution, signed by Seton on the frontispiece of Volume I. Large Quarton, Four volumes, original brown and tan gilt-stamped cloth, top edges gilt. Seton's experiences on a Canadian farm in the 1870s "convinced him to become a naturalist... One of the country's leading nature writers and illustrators,... Seton played an important role in the formation of the Boy Scouts of America, writing the original handbook, The American Boy Scout" (ANB). This splendid catalogue of game animals, illustrated with 1,500 photographs, halftone plates and line cuts, most made from Seton's own drawings from life, documents 100 land animals, "which are considered 'game,' either because they have held the attention of sportsmen, or received the protection of law." These include cats, wolves, foxes, bears raccoons, badger, weasels, deer, antelope, buffalo, sheep, peccary, squirrels, rabbits, armadillo, and opossum. The text takes its shape "from scraps I have gathered in the woods, in the records of the great museums, in the journals of naturalists, in the tales of guides and hunters. (Inventory #: 109233)
$3000.00 add to cart or Buy Direct from
Raptis Rare Books
Share this item