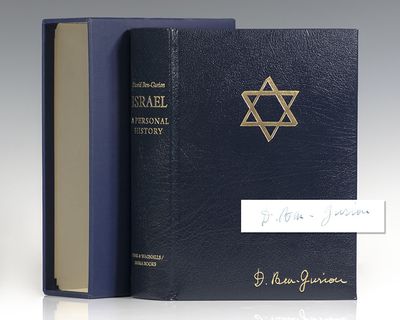 by Ben-Gurion, David
New York: Funk and Wagnalls Inc, 1971. Signed limited first edition, one of 2000 copies. Signed beneath the photographic frontispiece by David Ben-Gurion. Thick quarto, original full dark blue morocco, watered silk endpapers, top edge gilt. Fine in a fine slipcase. David Ben-Gurion's life has been so completely identified with Jewish history that "Israel: A Personal History" amounts to an autobiography. With this book, Ben-Gurion joins the small company of great historical figures who have left for posterity a personal record of the events in which they were prime movers. (Inventory #: 109079)
$2000.00 add to cart or Buy Direct from
Raptis Rare Books
Share this item