The Years of Lyndon Johnson: The Path To Power, Means of Ascent, Master of the Senate, Passage To Power. 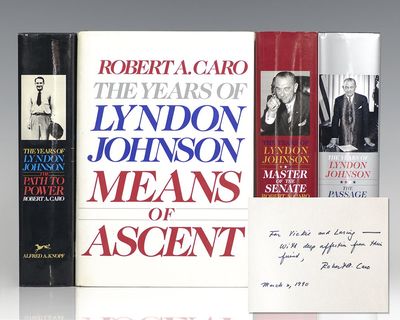 by Caro, Robert A
New York: Alfred A. Knopf, 1982-2012. First editions of each volume in the historian's ground-breaking biography on President Lyndon Johnson. Octavo, 4 volumes, original cloth. Each volume is signed by Robert Caro, with Means of Ascent an association copy, inscribed in the prior to publication by the author on the front free endpaper, "For Vicki and Loring- with deep affection from their friend, Robert A. Caro March 2, 1990." The recipients were close friends writers, Vicki Goldberg and Loring Eutemay. Also, laid in is a signed postcard by Caro to the same recipients. Each are fine in near fine to fine dust jackets. An exceptional set with noted provenance. "A monumental political saga . . . powerful and stirring. It's an overwhelming experience to read The Path to Power" (The New York Times). "Stands at the pinnacle of the biographical art" (Donald R. Morris, Houston Post). (Inventory #: 105633)
$1600.00 add to cart or Buy Direct from
Raptis Rare Books
Share this item