The Nile. Notes for Travellers in Egypt and in the Egyptian Sudan 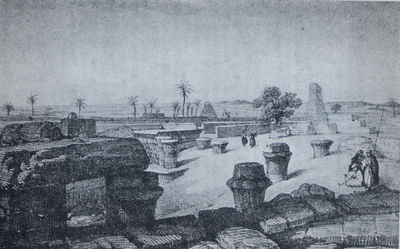 by Budge, E. A. Wallis
London, Cairo: Thos. Cook & Son, 1912. Twelfth Edition. Softcover. vg. Octavo. xx, (4) 1094pp., 1 folding map. Original brown cloth with gilt-stamped illustrated with ruling, and gilt lettering on spine. Marbled edges and endpapers. Two pages with color maps of Cook's Steamer and Dahabeah Service on the Nile. Historiated endpieces. The folding map facing page 834 is Cook's Map of the Nile from Wadi Halfa to Khartum. Expanded edition of this popular guide in its twelfth edition, illustrated extensively with reproductions of hieroglyphic papyrus and plans in text. "Having for some years felt the insufficiency of the information given by the unauthorized and self-constituted Dragomans to travellers on the Nile, and finding with one or two striking exceptions how limited is their knowledge of facts relating to the history of the antiquities in Upper Egypt and Cairo, Messrs. Thos. Cook and Son have arranged with Dr. E. A. Wallis Budge, Keeper of the Egyptian and Assyrian Antiquities in the British Museum, to compile the following pages, which they have much pleasure in presenting to every passenger under their Nile arrangements on their Tourist Steamers and Dahabiyahs." (Introduction). Contains index at rear. Binding with light wear along edges, small chips and covers lightly rubbed. Previous owner's name inked to half-title and a few pencil markings in margins of block. Overall in very good condition. (Inventory #: 46284)
$100.00 add to cart or Buy Direct from
Eric Chaim Kline Bookseller
Share this item