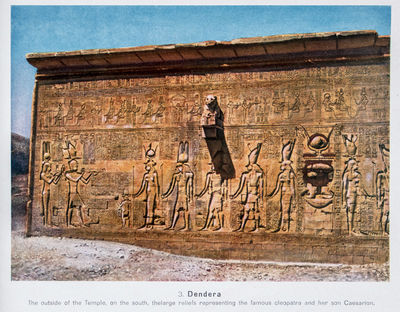 by n/a
Luxor: A. Gaddis & G. Seif, 1900. Hardcover. vg. Oblong Octavo. 1 leaf, 47 color plates. Original brick red cloth with gilt lettering and gilt framed color image mounted to cover. Tan endpapers. Color illustrated title page. A detailed photographic survey, in color, of Luxor, often characterized as the world's greatest open-air museum, depicting the ruins and sculptures of temples, the Papyrus Columns of Amen-Hotep III., the famous obelisk of Ramses II., the Ptolomey Gateway at Karnak, the Avenue of Sphinxes, the Mortuary Chapel at Thebes, the Tomb of Amen-Hotep II., the Colossus of Memnon, the Temple of Horus at Edfu, the Pharaoh's Bed at Philae,the Aswan dam among other sites, including villages and their inhabitants, e.g. the Sakkah (Water Carrier). Light wear along edges of binding with small chips in cover photograph. Slightly starting at inside covers. Binding and interior in overall very good condition. (Inventory #: 46312)
$150.00 add to cart or Buy Direct from
Eric Chaim Kline Bookseller
Share this item