A Concordance to the Septuagint and the Other Greek Versions of the Old Testament (Including the Apocryphal Books): Vol. I. A-I; Vol. II. K-Ω; Supplement. 3 volumes bound in 2 (Complete) 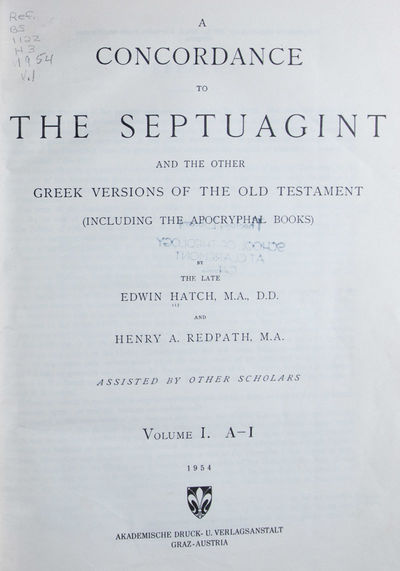 by Hatch, Edwin; Henry A. Redpath
Graz, Austria: Akademische Druck-u. Verlagsanstalt, 1954. Later edition. Hardcover. vg. Large quarto (11 x 8 1/4"). vi, [2]. 696pp (Vol. 1); [4], 697-1504pp (Vol. 2); [4], 272pp (Supplement at the end of second volume). Modern black cloth library binding, with gold lettering to spines. In 1897, the two volumes of the main body of the Oxford Concordance to the Septuagint, as it was then known, were published as a set five years after the individual fascicules began to appear. The original editor, Edwin Hatch, had died in 1889; in 1906 his successor, Henry A. Redpath, completed the project by issuing a third volume that included a list of additions and errata to the main body as well as four appendices: (1) a concordance of proper names, (2) a concordance of the recently discovered Hebrew text of Ben Sira, (3) a concordance of the newly published Hexaplaric materials, and (4) a comprehensive reverse Hebrew-to-Greek index. Unmodified reprints were issued by the Akademische Druck und Verlaganstalt (Graz, Austria) in 1954 (our copy), and five times by Baker Book House between 1983 and 1991. Ex-library copy with bookplate on inside of each front cover, pocket at rear, and stamps at top and lower paper edges. Binding and interior in overall very good condition. (Inventory #: 46435)
$175.00 add to cart or Buy Direct from
Eric Chaim Kline Bookseller
Share this item