London to Ladysmith Via Pretoria 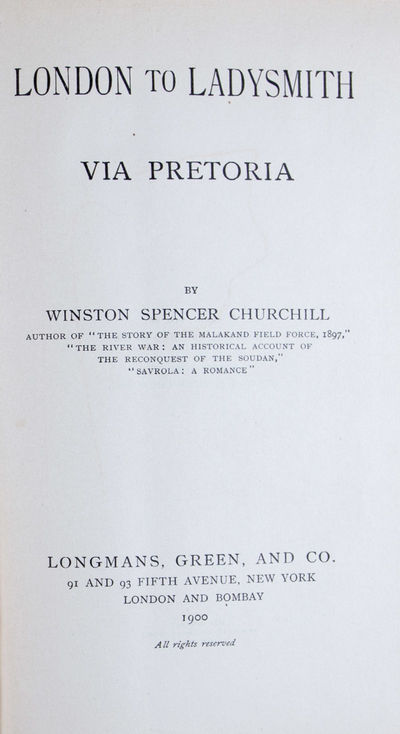 by Churchill, Winston Spencer
New York: Longmans, Green, And Co, 1900. First American edition. Hardcover. vg+. Octavo. xi (i), 496pp., 3 folding maps, incl. frontispiece. Original red burlap binding with gilt lettering and ruling on cover, gilt lettering on spine. Frontispiece folding map. "This small book is mainly a personal record of my adventures and impressions during the first five months of the African war. It may also be found to give a tolerably coherent account of the operations conducted by Sir Redvers Buller for the relief of Ladysmith." (Churchill). The correspondence first appeared in the Morning Post newspaper. The American edition saw only one printing of 3,000 copies, with roughly 1,850 copies sold, and is considered more scarce than the first British edition. Illustrated with six maps, three of them folding with frontispiece printed in red and black, a chart illustrating the State Model Schools, and a battle formation. Churchill's daring escape from capture by the Boers is considered to have launched his political career. Binding with very light wear along edges, else in very good+ condition. (Inventory #: 46290)
$175.00 add to cart or Buy Direct from
Eric Chaim Kline Bookseller
Share this item