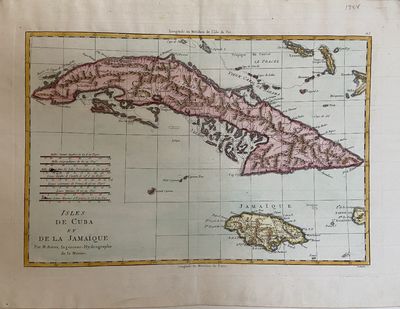 by BONNE, Rigobert
Paris: Rigobert Bonne, 1788. unbound. Map. Engraving with hand coloring. Image measures 10 1/4 x 14 3/4". Page measures 12 1/4" x 17 1/8". This map of Cuba and Jamaica is by one of the most significant French cartographers of the 18th century. Bonne has elegantly rendered the shape and detail of the coastlines, showing towns, ports, rivers, and some topographical features. The map also includes parts of the Bahamas, St Domingue (present-day Hispaniola), and the Cayman islands. Some toning and stains but otherwise good condition. This map, published in Bonne's 1780 atlas, conveys the rational cartographic style of the day in its lack of title cartouche, rhumb lines, or any other decorative elements. Only pictorial mountains remain and serve to describe the mountainous terrain. Rigobert Bonne (1727-1795) was one of the most important cartographers of the late 18th century. He served as Hydrographer to France, and during his term, he produced a number of detailed and useful maps, particularly of coastal regions. His work is often devoid of decorative cartouches and compasses roses and marks a turn in European mapmaking away from decoration toward technical mapping. (Inventory #: 294311)
$300.00 add to cart or Buy Direct from
Argosy Book Store
Share this item