Heritage: Civilization and the Jews. 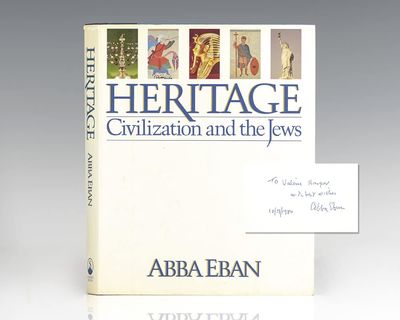 by Eban, Abba
New York: Summit Books, 1984. First edition of this work by Abba Eban. Quarto, original half cloth, illustrated. Presentation copy, inscribed by the author on the half-title page, "To Valerie Harper with best wishes Abba Eban 10/13/1984." The recipient Valerie Harper was an American actress best remembered for her role as Rhoda Morgenstern on The Mary Tyler Moore Show (1970-1977) and its spin-off Rhoda (1974-1978). For her work on Mary Tyler Moore, she received the three Primetime Emmy Award for Outstanding Supporting Actress in a Comedy Series, and later received the award for Outstanding Lead Actress in a Comedy Series for her work on Rhoda. Fine in a near fine dust jacket. Jacket design by Susan Parsons/ Robert Anthony, Inc. Heritage: Civilization of the Jews is a magnificently illustrated written history and the companion volume to the award-winning PBS television series Heritage, narrated by Abba Eban and viewed by a global audience. Eban was Israeli Foreign Affairs Minister, Education Minister, Deputy Prime Minister, and ambassador to the United States and to the United Nations. He was also Vice President of the United Nations General Assembly and President of the Weizmann Institute of Science. (Inventory #: 109469)
$300.00 add to cart or Buy Direct from
Raptis Rare Books
Share this item