Unfurl Those Colors! McClellan, Sumner, and the Second Army Corps in the Antietam Campaign 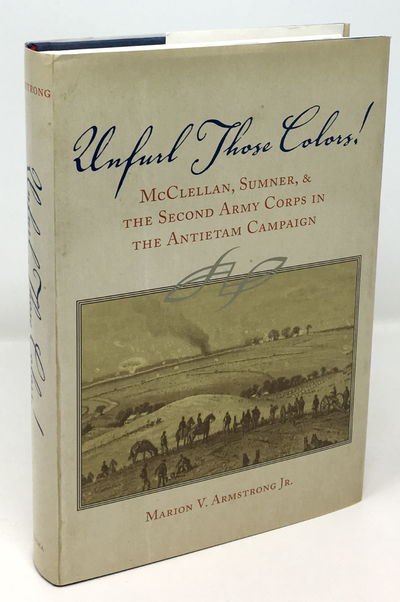 by Armstrong Jr., Marion V.
Hardcover with dust jacket, 16 by 23.5 cm, viii 384 pp., maps. Hardcover and jacket are very good to near fine with only faints signs of shelf wear – appears unread. From the publisher: "Unfurl Those Colors! provides an operational study of the Army of the Potomac during the pivotal Battle of Antietam on September 17, 1862, illuminating in details that will fascinate scholars and armchair generals alike US army commander George B. McClellan's command decisions and how those decisions were carried out in the middle and lower ranks of the Second Army Corps. Armstrong offers the most comprehensive account yet of the Second Army Corps' fight at Antietam, including Sedgwick's division in the West Woods and French's and Richardson's divisions at Bloody Land. He offers a fresh reappraisal of the leadership of Bostonian Edwin V. "Bull Head" Sumner as the only federal corps commander who doggedly and accurately carried out McClellan's battle plan and effectively directed the battle on the Federal right. Many esteemed Civil War historians consider Antietam a watershed moment in the Civil War, a crucial success after which Abraham Lincoln was emboldened to issue the Emancipation Proclamation. Unfurl Those Colors! offers a vital examination of the operational fabric of the Army of the Potomac's leadership and command in one of the most important days in American history." (Inventory #: 3295)
$40.00 add to cart Available from Bay Leaf Books
Share this item