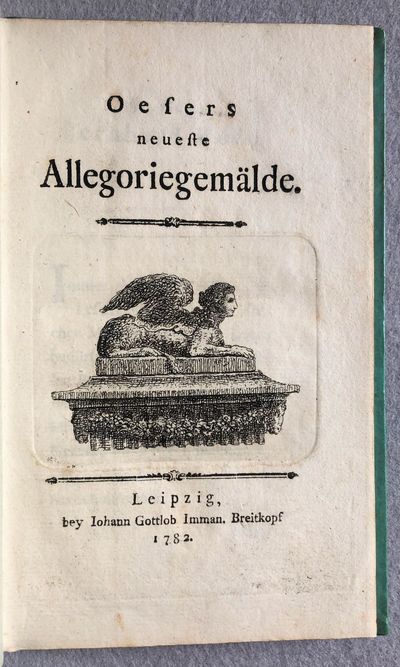 by [KREUCHAUF, Franz Wilhelm (1727-1805)]
Leipzig: Breitkopf, 1782. Small 8vo (166 x 102 mm). 60 pages. Etched title vignette of the Sphinx, etched vignette on final page of a winged flying cupid having just released a wreath, the latter signed R. f[ecit]. Contemporary green gilt-ruled paper over pasteboards, mottled edges (slight wear to corners and extremities of spine).*** First Edition of a contemporary description of allegorical murals and ceiling paintings by Adam Friedrich Oeser (1717-1799), in four different Leipzig locations. The author Franz Wilhelm Kreuchauf, a merchant, art patron and collector, called by Goethe a "Liebhaber mit geübtem Blick" (an amateur with an expert eye), wrote regularly on Leipzig art and culture. The artist Adam Friedrich Oeser was highly respected in Weimar, where he executed commissions for the court of the Duchess Anna Amalia, and later in Leipzig, where he resided from 1764 until his death. Named court painter and Director of the Leipzig Art Academy (Zeichnungs-, Mahlerey- und Architectur-Akademie), he taught drawing to Goethe and was a friend of Winckelmann's, whom he also instructed in art theory and praxis. Goethe's opinion of Oeser's artistic skills shifted over time, but he remained faithful to Oeser the man until the latter's death. During his lifetime Oeser was considered an important representative of the so-called sensitive (or sentimental) Classicism (empfindsamen Klassicisismus), but his reputation fell after his death, and he was spurned by 19th-century art historians (the reasons for this were recently studied by Timo John). Among the artistic media in which Oeser worked (which included book illustrations), he was perhaps best known at the time for his allegorical wall and ceiling paintings, which he executed in oil on linen canvases rather than as frescos, for private patrons, theaters, churches, and public buildings. His contemporaries considered him "one of the greatest living masters of Allegory" (John, p. 159, citing the Deutsche Bibliothek der schönen Wissenschaften, Leipzig, 1770), and the Leipzig bourgeoisie vied to have him decorate their townhouses and villas with scenes from Greek mythology and occasional visual allusions to contemporary poets such as Salomon Gessner. The present text provides a careful and detailed description of Oeser's allegorical paintings on the walls and ceilings of three private residences: of the military councillor Dr. Carl Wilhelm Müller (cf. John, p. 16), of the Gohlis palace, built in the 1750s by the Leipzig alderman Johann Caspar Richter, and of the noble family Nitzschwitz, as well as in the Leipzig Musiksaal (concert hall). The reader is led from room to room. Kreuchauf describes and comments on the architecture as well as on Oeser's paintings, and remarks on their interrelation, occasionally breaking into theoretical commentary on the role of art. For Kreuchauf, the paintings reflect each room's purpose while providing visual statements of the elevating nature of art itself. In the case of the Leipzig Musiksaal, for example, he credits the artist with fostering a powerful and noble union of the arts, which will remain effective, adds Kreuchauf, providing no unworthy representatives be admitted to "desecrate" the space: he here cites as worthy composers Bach and three now forgotten figures: Johann Adolf Hasse, Johann Adam Hiller, and Johann Gottlieb Naumann (p. 44). No doubt published in a small number, possibly for members of the Art Academy, this little book reflected a serious belief, prevalent at the time, in the higher purposes of allegorical art; but it could also be used as an art-lover's guidebook, the meaning of each figure and its purpose within the whole being so precisely described. Kreuchauf's descriptions of quiet, not overly cluttered rooms, whose walls and ceilings are decorated with discreet allegorical paintings, clearly evoke Weimar Classicism, of which the Anna Amalia library is today the most well-known example. Of the murals and ceiling paintings described herein, only those of the Festsaal in the Gohlisschloss survive. The book itself is scarce. In the US only Northwestern appears to hold a copy. The text was reprinted in 1899 as part of an edition of Kreuchauf's writings on art (Schriften zur Leipziger Kunst 1768-82). Cf. Holzmann-Bohatta I:1137 (1783 edition); Thieme Becker 25:571-3; Timo John, Adam Friedrich Oeser... Studie über einen Künstler der Empfindsamkeit (2006), online in the Goethezeitportal (goethezeitportal.de), passim. (Inventory #: 4038)
$2800.00 add to cart or Buy Direct from
Musinsky Rare Books
Share this item