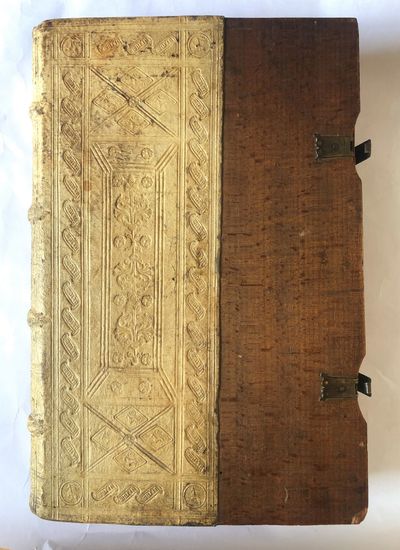 by SALIS, Baptista de (Trovamala); Ottmar NACHTGALL, editor
Strassburg: Johann Knobloch, 1516. Folio (309 x 212 mm). [10], 265, [1 blank] leaves. Double column. Title printed in red and black within large woodcut border by Hans Baldung Grien showing Holy Roman Emperor Maximilian I enthroned, holding scepter and orb, within a pillared hall, at his feet the imperial arms, signed with the artist's monogram (Hollstein 257; Johnson, German Renaissance Title-Borders, no. 3). Title somewhat stained and with a few short marginal tears, occasional browning. Contemporary Moravian half blind-tooled alum-tawed pigskin and wooden boards, sewn on four pairs of cords, the sides divided into panels, decorated differently on each cover with a variety of repeated tools and a single roll applied twice, the spine also blind-tooled (but rubbed), pair of brass fore-edge clasps with pigskin attaches, semi-circular clasp-strap recesses cut into in both boards. The binding well-preserved with clear impressions of the tools. Provenance: Franz Gottfried Troilo von Lessoth (ca. 1583- ca.1648), honorary councilor (from 1617) to Emperor Ferdinand III, with his large woodcut armorial bookplate, covering the entire front inner board; his family's library combined with the Piccolomini family library and donated ca. 1701 or 1702 to: the Library of the Piarists (Poor Clerks of the Mother of God), Schlackenwerth, Bohemia [today Ostrov], late 17th-century inscription on title, Ex libris Principissae Piccoliminiae Bibliothecae Slacoverd[ensis] Scholarum Piarum"; shelfmark "Morales No. 17" on front pastedown; "1516" stencilled or penned in modern black ink at foot of spine; with E. K. Schreiber, 1984 (description inserted); sold to Wolfgang G. Scholz, sale Boston, Skinner, 23 July 2019, lot 22.*** Ninth but first correct edition of this popular guide to canon law, revised and edited by the important Strassburg humanist Ottmar Nachtgall (Luscinius); an attractive copy with interesting Central European provenance. The 15th-century Franciscan Baptista de Salis or Trovamala published two versions of his Summa casuum conscientiae, completed in 1483, appearing under different titles, as the Summa baptistiniana and the Summa rosella. Arranged alphabetically by subject, from Abbas to Uxor, the work includes detailed guidelines for many topics, including absolution, adultery, divorce, confession, excommunication, heretics, the canonical hours, indulgences, novices, relics, and usury. Baptista's principal source was Nicolaus de Ausmo. Ottmar Nachtgall (1487-1537) was a priest and pioneer of Greek studies in Germany, and is credited with bringing the study of Greek to Strassburg. His student life epitomizes the cosmopolitanism of humanist education: His first teacher was Jakob Wimfeling; he then read literature and philosophy in Paris, studied theology and canon law in Louvain and later Padua, and finally learned musical composition in Vienna. His interest in classical Greek led him to visit Greece. Returning to Strassburg in 1514, he became a member of the humanist circle which included his old tutor Wimfeling, Johann Geiler von Kaisersberg and Sebastian Brant. Erasmus respected Nachtgall's knowledge of Greek and encouraged him. Although he remained a Catholic, Nachtgall's resistance to corrupt practices in the church hindered his career, and he left the city in 1523 for Augsburg. In a poem on the title page, and in his dedication to Jacobus Richshofen, vicar of the Strassburg Thomaskirche, and to Johann Sigrist, licentiate and scholasticus, Nachtgall praises the utility of the Summa rosella, as it provides a guide for students through the dense complications of law. Previous editions however, he asserts, were rife with errors, and correcting the text was a "Herculean labor" (the subtitle refers specifically to the Venice edition, presumably the Paganinus de Paganini edition of 1499, Goff S-50). This copy made its way eastward soon after publication, as the exuberantly decorated and well-preserved contemporary binding is Moravian or Bohemian. Four tools associated with a workshop described by the Eindbanddatenbank as active in Moravia ca. 1520 (EBDB w003447) are used on the binding. These are a small unicorn tool (EBDB s027811), a Maria banner (EBDB s027807), and two budding plants (Knospenstaude, EBDB s027798 and EBDB s027814). Not recorded in the EBDB are at least three further tools: a small circular deer tool and two rosettes, and one narrow leafy roll (the spine tooling is largely indecipherable). The book remained in what is now the Czech Republic: in the early seventeenth century the rich Czech humanist aristocrat Franciscus Godefridus Troilus à Lessoth, whose family originated in Rovereto in the Italian Alps, mounted one of his large woodcut bookplates inside the front cover (at least one other bookplate of his is known). Troilo's title of councilor to Ferdinand III was apparently purely honorific, granted in recognition of his service and monetary contributions to the throne rather than with any expectation of administrative duties. During his lifetime or soon after his death his family's library was deposited in the library of the old convent of Strahov, and was later absorbed into the family collection of Princess Piccolomini(née Maria Benigna of Saxe-Lauenburg) to form the "Troilo-Piccolomini" library, which was consigned in or around 1700 to the Piarists of Schlackenwerth (today Ostrov, in the Czech Republic). The Piarist library was taken over by the municipal Gymnasium of Schlackenwerth / Ostrov after 1815, and in 1910 the municipality sold the entire contents of the Gymnasium library to a Viennese bookseller. I locate two copies in North America, at Berkeley Law Library and Latimer Library, Saint Vincent College and Archabbey. Adams T-1002; Miriam Chrisman, Bibliography of Strasbourg imprints 1480-1599, C1.3.34; Schmidt, Répertoire bibliographique Strasbourgeois jusque vers 1538 (Strasbourg 1895), VII Jean Knobloch, no 109 (with a typo in the foliation); Pennington, Bio-Bibliographical Guide to Medieval and Early Modern Jurists, no. 085, online at http://amesfoundation.law.harvard.edu/BioBibCanonists/Report_Biobib2.php?record_id=r085. On Nachtgall, cf. Contemporaries of Erasmus 3:3-4. On Troilo von Lessoth and Piccolomini, cf. Jan Racek, "Collezione di monodie italiane primarie alla Biblioteca Universitaria di Praga," Sborník prací Filozofické fakulty brn nské univerzity (Brno, 1958), 5-38: see pp. 11-12; and E. Raffel, "In Europa gedruckt, in Weimar gesammelt," in Seemann, ed., Europa in Weimar: Visionen eines Kontinents (2008), 48-76. (Inventory #: 4020)
$6750.00 add to cart or Buy Direct from
Musinsky Rare Books
Share this item