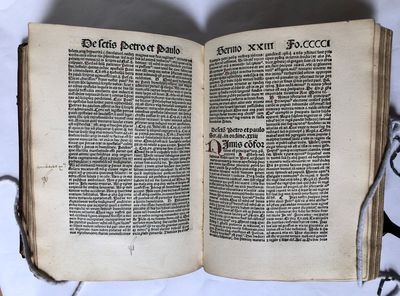 by BIEL, Gabriel (ca. 1410/1415-1495)
Hagenau: Heinrich Gran, for Johann Rynman in Öhringen, 1510. 2 volumes in one, 4to (216 x 153 mm). Sermones de tempore: [10], 166 leaves. Sermones de sanctis: 85 of 86 leaves, foliated [8], CCC-LXX-CCCCXLVII, without final blank leaf. Double column, gothic types. Initial spaces with guide letters. Rubricated: opening initial in blue, the rest in red, capital strokes in red. Contemporary German blind-tooled calf over wooden boards, sewn on four split-strap hide sewing supports, covers panelled with an outer border of a repeated Ranke (scrolling vine) roll (3 impressions at top and bottom and 1 and 2 impressions at sides), inner border of a Maria banderole alternating with a small rosette, diagonal fillets dividing the central rectangle into 12 compartments, the 8 outer compartments each with a small round fleur-de-lys tool, the 4 inner compartments with a larger rosette in a quadrilateral frame (the tools not found in the Einbanddatenbank or Schwenke-Sammlung); one of two brass fore-edge clasps, the catches remaining but differing from each other, plain edges, front and rear endleaves each consisting of a single sheet of parchment sewn through to create the pastedown and free endleaves, the parchment shrunk and wrinkled and the pastedown side no longer adhering, revealing sewing structure attaching the boards; rubbed and chipped, spine largely restored. Modern morocco-backed slipcase with inner folding case. Provenance: A few contemporary marginalia and manicules; bookplate of Otto Orren Fisher (1881-1961), Detroit industrial surgeon and collector. Second editions, the first printed in Hagenau, by that city's first printer, of two sermon collections by the theologian and preacher Gabriel Biel, edited by his colleague Wendelinus Steinbach, and including his two sermons on the plague, "Contra pestilentiam sermo medicinalis," and "De Fuga pestis."A native of Speyer, the theologian Gabriel Biel studied in Erfurt and Cologne, and preached for nearly half a century, first at the Cathedral of Mainz and later for the Brothers of the Common Life (in Marienthal, Königstein and Butzbach), several of whose houses in the German-speaking lands he helped found. He served as provost of the brethren's house in Butzbach and later in Urach, and in 1484-aged over 70-became professor of Theology at the recently founded University of Tübingen, where he served twice as rector. Although trained in the Thomist tradition, of which he is sometimes considered one of the last representatives, Biel's brand of piety, influenced by mysticism and the Devotio Moderna, was characterized by a certain practicality and openness to humanism and to the social currents of his time. He had advanced economic ideas, set forth in his treatise on currency, was against the forced baptism of Jews, and "had considerable influence on Martin Luther" (Cont. of Erasmus). Biel, who wrote his sermons in Latin and delivered them in German, was reputedly called the "monarch of theologians" by Heinrich Bebel (cf. Catholic Encyclopedia), who contributed two laudatory poems, praising Biel and Steinbach, to the Sermones de tempore (fol. [10]v).Like most of his contemporaries, Biel had no doubt personally experienced outbreaks of plague. Later in his life, in 1483, the entire University of Tübingen briefly fled the town because of an outbreak. Flight was in fact the only "remedy," but it was frowned upon by many as both cowardly and a fool's attempt to evade God's wrath. In Biel's two sermons on the plague (Sermones de Tempore, fols. CXLIIII-CLV), Biel considers this question, reviewing the theories of contagion and the medical remedies proposed by physicians, and concludes that, although "flight could be seen as a form of medicine, and therefore licit,... it was never the less to be deprecated. Flight was contrary to charity, since it entailed abandoning the sick. It was also pointless, since God has set a limit on every human life; better, therefore, to recognise that plague is a divine punishment and seek spiritual regeneration" (R. Horrox, ed., The Black Death, 1994, pp. 108-9). Biel recommends trusting the doctors, praying, and above all, accepting death without fear.Wendelin Steinbach prepared several discrete collections of Biel's sermons, which had not previously circulated in manuscript. They were first published in Tübingen by Johan Ottmar in 1499-1500 (Goff B-662), as separate editions though with continuous signatures and foliation. Readers had these collections bound together in various combinations, and very few copies contain the complete series. For the present Hagenau series of editions, the Sermones de sanctis was signed and foliated consecutively following the Sermones de festivitatibus Virginis (not present in this copy); it has its own colophon and is complete in itself. US institutional copies of the 1510 Sermones de tempore, which contains the two plague sermons, are found at Harvard, the University of Iowa, and possibly the Newberry Library (in OCLC but not in their online catalogue). Of the Tübingen edition ISTC locates 5 US copies (Harvard Countway Library of Medicine, Free Library, National Library of Medicine, Newberry, and U. Wisconsin).  Gran reprinted the collection in 1515 and 1520.VD16 B 5398  (=VD16 B 5376, VD16 B 5386, VD16 B 5390, VD16 B 5394, VD16 B 5402, VD16 B 5409). Cf. Adams B-2026 (with the Sermones de Festivitatibus Virginis but without the Sermones de Tempore); Verfasserlexikon2 I:853-858; Contemporaries of Erasmus I:146; I. Cursius, "Eine Karriere zwischen vita contemplativa und vita activa," Gabriel Biel und die Brüder von Gemeinsamen Leben (Stuttgart 1998), pp. 1-24. (Inventory #: 4021)
$4,000.00 add to cart or Buy Direct from
Musinsky Rare Books
Share this item