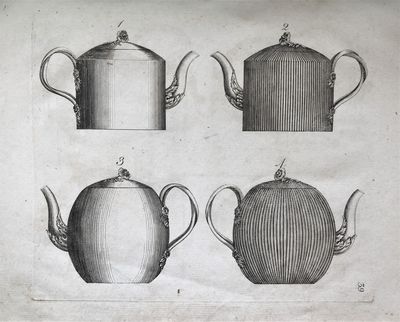 by ENGLISH POTTERY TRADE CATALOGUE
Leeds, 1794. Large 4to (308 x 240 mm). [12] leaves text, comprising 3 printed titles, each with a 6-page description of the items in the catalogue, in German, French and English, and 45 engraved plates, of which one folding, containing 186 designs, numbered 1-152, with an additional 34 numbered and lettered designs for "tea-ware" (tea- and coffee-ware in the French and English descriptions). Paper watermarked with a fleur-de-lys and shield with capital letters L V G below (Lubertus van Gerrevink). Some light scattered foxing and offsetting, plate 20 with closed tear to top margin just entering plate area, without loss, folding plate 26 torn across and repaired. Modern retrospective calf gilt, edges red-stained (extremities very lightly rubbed). Provenance: contemporary notes in Portuguese on the blank verso of the last plate; Duncan Grant Warrand, loosely inserted ex-libris; Martin Woolf Orskey, bookseller (1925-2018), signature at end with purchase date 1972. *** A multi-lingual catalogue of pottery produced by Hartley, Greens, and Co., for the use of traveling salesmen. Founded circa 1756, at Hunslet, south of Leeds, the company gained a reputation for its elegant cream-colored earthenware in the classical style, known as creamware, a type of earthenware made from white Cornish clay combined with a translucent glaze to produce a characteristic pale cream color. Hartley, Greens, and Co. so dominated the market that their products came to be referred to as Leedsware, or Leeds pottery. Although some of the pieces in this catalogue are for display or special use, Leeds pottery was generally a more everyday pottery than that of Wedgewood (their principal rival), and hence its survival rate is low. The earlier pieces (before around 1775) were furthermore unmarked, making attribution uncertain, thus rendering the firm's printed catalogues all the more important. The present catalogue was "one of the earliest pattern books published in England by pottery manufacturers for the use of their travellers, with illustrations of all the articles produced by the firm" (Solon). It shows the creamware as issued from the studios, before jobbers and importers added colored glazes. Shown are terrines, sauce boats, salts, jugs, egg cups, covered terrines and bowls, cake plates, cruet stands, candlesticks, urns, tea services, and a remarkable tulip vase, among other useful objects of the table, many with ornaments, some in the characteristic openwork or perforated style. All 186 designs are numbered and identified in the accompanying plate lists. The variety is impressive. Copies of the Leeds catalogues were often cut up by jobbers, who relied on the illustrations to transmit orders accurately rather than trusting to written descriptions of the forms. Their consequent rarity makes the publishing history of the catalogues difficult to unravel. The earliest catalogue appeared in 1783, with the text in English only and 41 plates. The Danish National Library has a copy with the text in English and French, and the English title dated 1786. Another copy of the present 1794 edition is held by the V&A, but it has only 41 plates. Meanwhile, there are also copies of a 1794 edition (at Yale and RISD) with the English text only, but with 71 plates. The plates were reissued in 1795 and 1814 or 1815, these undated issues are identified by the watermarked dates of the paper they are printed on. Most of the variously dated copies seem to be reissues of the same plates. Most of the variously dated copies seem to be reissues of the same plates. A comparison of this copy to the Winterthur copy from 1814, which is digitized, shows that the same plates were used, with the addition of an engraved oval label, " Leeds Pottery" on each plate, up to and including plate 38, a compotier from which emerges a large cross, after which the designs diverge. The editions or issues after 1795 do not have the very useful text, with gives the name, function, and size of each piece: "As the price lists and the general title had been printed independently from the plates, and not in sufficient quality to accompany the sets of engravings, these late copies are generally found without the title and the printed description of the objects. These price lists, now very rare, were printed in English, French, German and Spanish. As the prices were subject to constant revision, prices are added with pen and ink" (Solon). Our copy is unpriced. Altogether, OCLC locates fewer than a dozen copies, some incomplete, of various issues or editions of the Leeds pottery catalogue. Cf. M.-L. Solon, Ceramic Literature (1910), p. 196. (Inventory #: 4016)
$12,500.00 add to cart or Buy Direct from
Musinsky Rare Books
Share this item