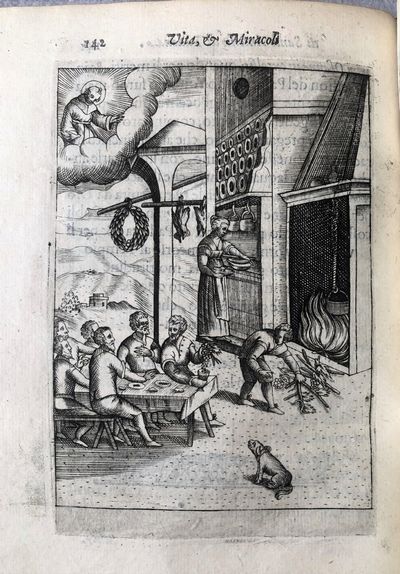 by ANTHONY OF PADUA - HELIA DA CORTONA [i.e., NUCCI, Elia (d. 1638)]
Venice: Nicolò Honorato, 1602. 4to (197 x 145 mm). [6 leaves], 206 pp. (some mispaginations). Engraved title and 20 full-page engravings. Page 197 (f. N3r) left blank except for headline, for an illustration that was not supplied. Historiated woodcut initials, a few typographic passe-partout initial borders, woodcut and typographic head- and tailpieces. Printing flaw to headline of p. 105. Some marginal finger soiling, occasional faint staining, else fine. Contemporary armorial binding of olive hairsheep(?), sides with the central arms of Jacques-Auguste de Thou and his second wife, Gasparde de la Chastre (Olivier Hermal Roton 216, fer 8), spine in six gold-paneled compartments, title gold-lettered in second compartment, the de Thous' joint monogram "IAG" (Jacques Auguste Gasparde) in the remaining compartments, small bee tool at head and tail, pink and blue silk headbands, plain edges and endpapers (discreet restorations, possibly retinted). Provenance: Jacques-Auguste de Thou (1553-1617), supra-libros; early inscription on front pastedown "3 C.P. I [?]. 3 H. 83."  First Edition, the de Thou copy, of a rare illustrated hagiography, printed and published in Padua, of that city's patron saint.Cataloguers of this and later editions have consistently misinterpreted the title attribution to "Helia da Cortona Mino. Conv." as a reference to the 13th-century Franciscan, a contemporary of Saint Anthony. In fact the author was alive at the time of printing: Elia Nucci of Cortona was a Capuchin who entered the Orders of Friars Minor in 1577, and served as priest and superior in various monasteries before returning to the convent at Cortona, where he died in 1638. This was his only published work. Born in Lisbon and baptized Fernando Martins de Bulhões (Fernando Buglione in this account), St. Anthony died in Padua before the age of 40, in 1231, and, in one of the quickest canonizations in Church history, was declared a Saint the following year. A Franciscan, he was a superbly gifted preacher, teacher, and missionary. "It is said that Francis himself chose him to teach theology to the friars at Bologna and Padua" (Oxford Dict. of Saints). His cult gained popularity in the 15th and 16th centuries. Patron of things lost, of sailors and the shipwrecked, he was credited with numerous miracles, but remains "above all an outstanding representative of the Franciscan pre-scholastic period" (op. cit.).This appears to be the only recorded publication of Nicolò Honorato, described as a bookseller in Padua. The engraved title shows Saints Francis and Anthony, the arms of Padua and a rampant lion, and, above the imprint, a device with a musician and dog. Nucci's account, which is prefaced by poems from three local dignitaries, including the printer or publisher Horatio Larducci, emphasizes the Saint's thaumaturgical prowess. It is illustrated with a series of primitive but charming engravings, some but not all of which were re-used in the following edition, which appeared in Venice in 1606, under the imprint of the brothers Marchetti.An early bookseller's description mounted on the front pastedown adds to the de Thou provenance that of William Beckford, a probably spurious attribution.  Together OCLC and ICCU (PUVE2197) cite five locations: New York Public Library, BnF, Univ. of Bern, Padua, and Nardò, Diocesan library. (Inventory #: 4027)
$7,800.00 add to cart or Buy Direct from
Musinsky Rare Books
Share this item

The Draughts of the Most Remarkable Fortified Towns of Europe, with a geographical description of the said places ... to which is prefix'd an introduction to military architecture, or fortification..

London : printed for Isaac Cleave and John Hartley , 1701
(click for more details about The Draughts of the Most Remarkable Fortified Towns of Europe, with a geographical description of the said places ... to which is prefix'd an introduction to military architecture, or fortification..)
View all from this seller>