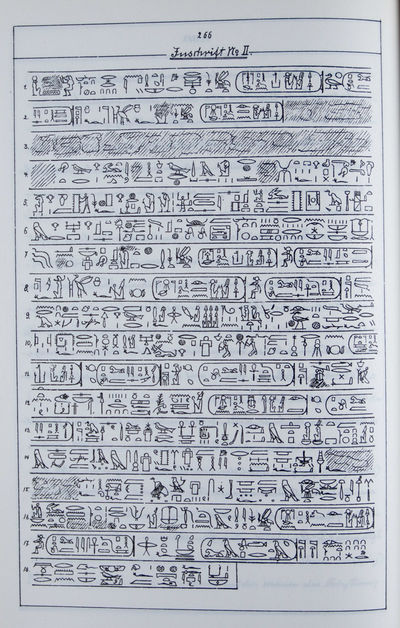 by Brugsch, Karl Heinrich
Graz, Austria: Akademische Druck-u. Verlagsanstalt, 1968. Later edition. Softcover. g to vg. Quarto (10 3/4 x 7 1/4"). [2], vi, [4], 194, viii, 195-530pp (Vol. I./II.); [2], vi, [2], 531-618, viii, 619-850pp (Vol. III./IV.); [2], xxii, [2], 851-1234, xvi, 1235-1578pp (Vol. V./VI.). Original printed wrappers. Originally published between 1883 and 1891, Karl Heinrich Brugsch's monumental work is a translation of many Egyptian inscriptions found in temples, monuments and papyri, all dealing with various topics. The first volume deals with astronomical and astrological inscriptions while the second volume contains a translation of texts on the Egyptian calendar. The third volume deals with geographic inscriptions and the fourth is devoted to inscriptions of Egyptian mythology. The fifth volume deals with Egyptian historical and biographical inscriptions, and the sixth and last volume with buildings / architecture. Ex-library copy with stickers to lower spines and at upper left margin of each front cover. Bookplate on inside of each front cover, and stamps at top and lower paper edges. Minor age-toning along edges of wrappers. Text in German. Wrappers in overall good to good+, interior in very good condition. About the author: Heinrich Karl Brugsch (also Brugsch-Pasha) (1827-1894) was a German Egyptologist. He was associated with Auguste Mariette in his excavations at Memphis. He became director of the School of Egyptology at Cairo, producing numerous very valuable works and pioneering the decipherment of Demotic, the simplified script of the later Egyptian periods. (Inventory #: 46440)
$275.00 add to cart or Buy Direct from
Eric Chaim Kline Bookseller
Share this item