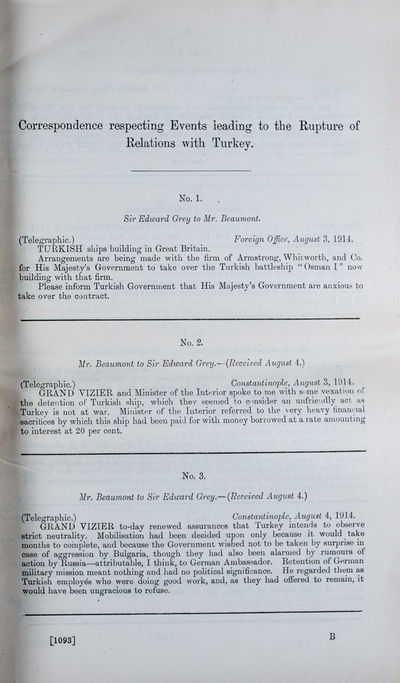 by Mallet, Louis; Sir Edward Grey
1914: Printed Under the Authority of His Majesty's Stationary Office by Harrison and Sons, London. First edition. Softcover. vg- to near fine. Small folios. Miscellaneous No.13: (xiv) 77pp. Miscellaneous No.14: 7pp. Printed stapled and sewn wrappers with black lettering on the front and back covers. "Presented to both houses of Parliament by command of His Majesty, November 1914", these two publications serve as a record of the correspondence between Louis du Pan Mallet (1864-1936), the British ambassador to Turkey, and his superior Sir Edward Grey (1862-1933) the British Secretary of State, during the period of August 3rd - December 4th 1914. This documents the period of the souring of relationships between Great Britain and the Ottoman Empire between the outbreak of WWI and the ultimate decision of the Ottoman empire to join the war on the side of the Central Powers. Included is a detailed unfolding of the pursuit of Goeben and Breslau, which was the final turning point in Constantinople's decision to enter the war on the side of the Central Powers. Table of contents on the first page of "no.13". There is an ink stamp on the front of the "No. 13", from the "War Council of Bryn Mawr". Ex-library with small white paper labels on top left corner of the front covers. Front cover of "no.13" with some light stains Back covers with some small stains. Horizontal creases from folding. Minor rubbing, creasing and/or chipping to extremities. Wrappers in very good-, interior in near fine condition overall. (Inventory #: 46407)
$450.00 add to cart or Buy Direct from
Eric Chaim Kline Bookseller
Share this item