A Likeness to Voices 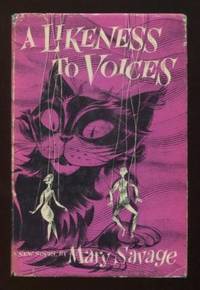 by Savage, Mary
New York: Dodd, Mead & Company (A Torquil Book). Good in Fair dj. (c.1963). First Edition. Hardcover. [a serviceable reading copy with various depredations: the book is only moderately shelfworn, but the front endpaper has been removed with consequent weakening of the front hinge, which has also contributed to a split in the binding between the first and second signatures (i.e. between pages 8 and 9); the jacket is edgeworn, with a few tiny nicks and tears, a bit of paper loss at the spine ends, and a wide but shallow chip along the top edge of the rear panel -- but it had also apparently gotten wet at some point (at the rear panel and rear flap only) and some of the color from the blue cloth binding has discolored the interior of those parts of the jacket, with a little bit of bleed-through onto the rear panel]. "When Stanley Withers loses his third job in five years, his wife decides it is time she took a hand. But the methods she uses and the assistants she employs are highly unorthodox, to say the least, resulting in a tale of modern witchcraft inolving one of the most talented and trouble-prone cats ever to survive 2,000 life cycles." Alternate chapters are narrated by said cat, "Rasputin" by name. Mary Savage was the last wife of fellow novelist Davis Dresser (better aka Brett Halliday), to whom she was married from 1961 until his death in 1977. All four of her novels, all of which were published between 1960 and 1964, were issued under the Torquil imprint (Torquil Publishing Company being Dresser's company, founded in 1953), and both she and Dresser/Halliday seemed to stop writing fiction circa 1965, which (coincidentally or not) was the year their son was born. . (Inventory #: 20998)
$20.00 add to cart Available from ReadInk
Share this item
ReadInk
Offered by

A Variety of Fallon [*SIGNED*]

Boston : Little, Brown and Company , 1950
(click for more details about A Variety of Fallon [*SIGNED*])

New York : Viking , 1985
(click for more details about Queer)
View all from this seller>