The Book of Common Prayer and Administration of the Sacraments, and Other Rites and Ceremonies of the Church of England, Illustrated and Explained By a Full and Comprehensive Paraphrase at the Bottom of Each Page. By the Rev. Leonard Howard, D. D. 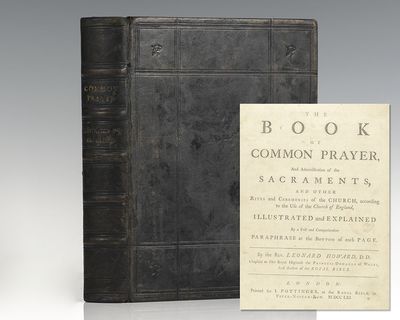 by Howard, Rev. Leonard
London: Printed for J. Pottinger, 1761. Scarce 18th century Book of Common Prayer printed by the Rev. Leonard Howard, Chaplain to the Royal Highness the Princess Dowager of Wales. Quarto, bound in full calf with gilt titles and five raised bands to the spine, ruling and cornerpieces to the panels stamped in blind, all edges marbled, illustrated with engravings including frontispiece portrait of King George II. In very good condition. Gift inscriptions and history of provenance to the front free endpapers and verso of the frontispiece. Princess Augusta of Saxe-Gotha was the Princess of Wales from 1736-1751 and became Dowager Princess of Wales when her husband Frederick, Prince of Wales died and the throne was passed to their eldest son, King George III in 1760. Scarce. ESTC locates only four other copies. The Book of Common Prayer was created out of Thomas Cranmer's desire for a liturgical text that all of Europe's Protestant, English-speaking churches could agree on. Its magisterial liturgical language is, "as a source of spiritual inspiration for most Englishmen second only to the Bible" (PMM 75). The Book of Common Prayer was first issued in 1549 during the reign of Edward VI and revised through the reign of Mary I, James II, and ending significantly in 1832. (Inventory #: 109571)
$2,000.00 add to cart or Buy Direct from
Raptis Rare Books
Share this item