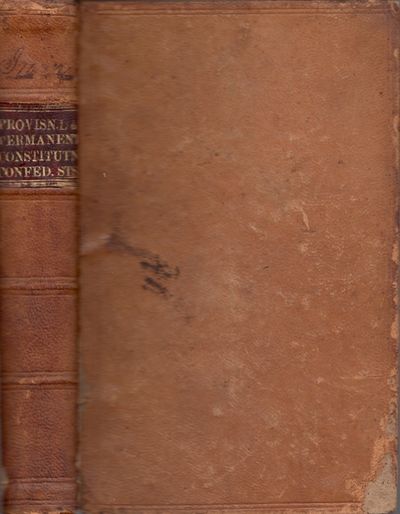 by [Confederate States of America]
Richmond: Tyler Wise, Allegre and Smith, Printers; Enquirer Book and Job Press by Tyler, Wise, Allegre & Smith, 1862. Leather bound. Good. Octavo. 4 Confederate imprints bound in one volume: 1. [1], 32 pages, pages 33-159, [1] page blank;. 2. 119 pages, [1] page blank. 3. 94 pages, errata page, [1] page blank. 4. 109 pages, [1] page blank, 19 page index, [1] page blank, [1]. Contemporary brown sheepskin leather binding with title label on the spine. The leather is edge worn and chipped on the left edge of the front board with a large chipped corner area on the back cover. The front joint is slightly cracked. The spine has a very small chip lower spine and an old ink name above the title label. Hinges and joints are sturdy and are in good condition. The text has varying amounts of toning to the sections with light to moderate scattered foxing. Inscription written on the front paste down reads - "David Irwin Marietta Ga June 4th 1862." Old pencil name of Butler on the right front flyleaf. Small red lined label bottom left corner of the front paste down with 35 written on it. The Confederate Constitution is located on page 15 of the first section. An index to the laws are included in the all the sections. The first and second sessions were first held at Montgomery, Alabama and were later printed in Richmond in the same year. The third and fourth sessions were first printed in Richmond. Rare, obscure compilation of the first 4 sessions of the Confederate Congress. No recent auction records found for this edition. Parrish & Willingham 20, 26, 27, 28.; See Sabin 15340 - "Provisional and permanent constitutions, together with the acts and resolutions of the first session of the Provincial Congress, of the Confederate States, 1861" (the Montgomery imprint); Sabin 15229 (first, second sessions in Montgomery and third and fourth sessions in Richmond); Howes C-674 -... "Other editions reprinted, with Acts of the 1st and 2nd sessions of the provisional Congress [enacted at Montgomery] and the 3rd session [enacted at Richmond]". Note: Howes does not include the 4th session in this entry. From the GeorgiaInfo website: Jurist and politician David Irwin was born in Wilkes County, Georgia on January 8, 1807. Early in life Irwin became noted for his penmanship, which helped earn him a position as a superior court clerk. Becoming interested in the law, he studied and was admitted to the Georgia bar at age twenty. Though he served several terms in the state legislature and at two constitutional conventions, Irwin is most noted for his significant contributions to the codifying of Georgia law. Irwin, Thomas R.R. Cobb, and Richard H. Clark were chosen to incorporate all common law, statutes, and judicial decisions into a single unified code of law in 1858. The code had to be revised in 1861, 1868, and 1873-with virtually all the revision work being done by Irwin; the revised versions were popularly know as "Irwin's Code." In addition to his political and judicial work, Irwin remained an active participant in the civic affairs of the state-working to improve state railroads and serving on a local board of education. He died in Marietta on Nov. 26, 1885. (Inventory #: 18305)
$3500.00 add to cart or Buy Direct from Americana Books
Share this item

In and About Portland