The North Star [all five issues, together with] North Star Review [first issue] 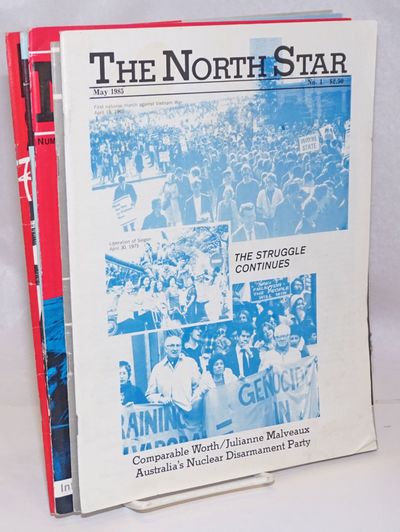 Berkeley: North Star Network, 1985. Near complete run of the short-lived journal in its two incarnations, missing only two issues. Issues present are The North Star No. 1-5 and North Star Review No. 1. 8.5x11 inches, some wear, soiling, and small stains, The North Star No. 1 with small stain on front wrap, Nos. 2 and 3 with remains of stickers used to hold shut for mailing on both front and rear wraps and address labels on rear wraps, No. 4 with stained rear wrap, No. 5 with old price sticker on rear wrap else generally good condition. Includes coverage of the campus anti-Apartheid movement, the Jackson campaign, Elayne Rapping on "Pornography, sexuality and the left," Edward Said and Salman Rushdie on Palestinian identity, an interview with Ron Daniels, an interview with Bernie Sanders, and Mike Davis' "Homeowners and Homeboys. (Inventory #: 245693)
$50.00 add to cart or Buy Direct from Bolerium Books
Share this item