Map of the Country Twelve Miles Round London 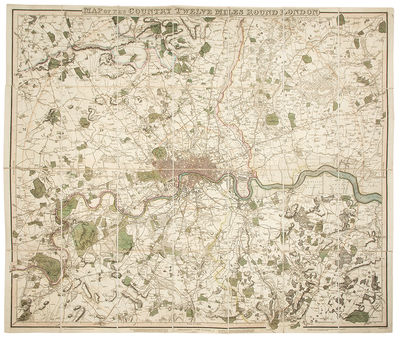 by GARDNER, W.R.
London: Charles Smith, 1835. Large engraved map on paper, contemporary hand-coloring, dissected and mounted on linen, housed in its original slipcase with map seller's label intact. Sheet size: 34 1/2 x 29 1/2 inches. A lovely linen-backed folding map of London and the surrounding area complete with the original publisher's slipcase. This is a folding map dissected in 28 sections, showing Enfield to the north, Keston to the south, Wennington to the east, and Southall to the west. The parks are coloured in green, the rivers in blue, the county boundaries in pink and yellow, the East of England regional boundary in light blue, and the extent of the "Twopenny Post" and "back fares for Hackney Coaches" in brown. The map also marks footpaths, hills, and railways. The sections of woods are not coloured but are designated with trees. The map also denotes some of the landowners' names, with a note at the bottom reading, "The publisher having Surveyed the whole of the Great Roads in this Map, and determined the exact situation of the Noblemen's and Gentleman's Seats, is aware that there may be some Houses omitted which from their multiplicity is unavoidable, but considerable pains have been bestowed in selecting those that appeared to him of most importance, but should any material omissions occur, information on the subject will be thankfully received and carefully attended to." Engraved by W. R. Gardner and published by London-based mapseller Charles Smith at 172 Strand. The publisher's case label reads, "New Map of the Country Twelve Miles round London, Containing the Whole of the Roads, which are from Actual Survey, the Exact Situation of the Noblemens & Gentlemens Seats, with the Names of the Occupiers, and Every Other Object Worthy of Notice." Howgego, Printed Maps of London 288. (Inventory #: 36090)
$1200.00 add to cart or Buy Direct from
Donald A. Heald Rare Books
Share this item
Donald A. Heald Rare Books
Offered by