A New Discovery of a Vast Country in America, extending above four thousand miles, between New France and New Mexico; with a description of the Great Lakes...with a continuation, giving an account of the attempts of the sieur de La Salle upon the mines of St. Barbe, &c. the taking of Quebec by the English.. 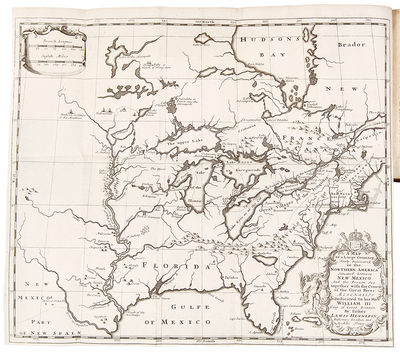 Two volumes in one, 8vo

The second edition of the English translation: with provenance to an important Director of the Hudson's Bay Company.

No other narratives of French exploration in the interior of North America enjoyed as wide a popularity or stimulated as much controversy and criticism among later scholars as those of Hennepin. A Recollet missionary, Father Hennepin went to New France in 1675, and in 1678 he set out with La Salle to explore the fertile basin of the Mississippi River. While La Salle turned back to raise funds to continue the voyage, Hennepin went on to ascend the river from Fort Crevecoeur (Chicago) and penetrated farther northwest into the interior than any white man to that time. He discovered St. Anthony's Falls near the present site of Minneapolis, and provided the first eyewitness account of Niagara Falls. The engraving of the Falls which appears in his narrative, although an imaginative rendering, was the earliest to be published. Hennepin was subsequently captured by the Sioux, and after several months of wandering, he was rescued by Daniel De Lhut. This edition contains translations of both Hennepin's second and third books, Nouvelle Decouverte... and Nouveau Voyage.... The first presents a fairly reliable account of Hennepin's actual travels and experiences, but also incorporates his entirely false claim to have descended the Mississippi to the Gulf of Mexico. This is, in fact, Father Zenobe Membre's account, which Hennepin boldly plagiarized from Le Clercq's Etablissement de la Foy. In his sequel, Nouveau Voyage, Hennepin added new material drawn from contemporary sources on Indian manners and customs and various North American travels. The first eight chapters describe the adventures and murder of La Salle, while the last concern the British treatment of the Recollets after the taking of Quebec in 1629. Despite the fact that Hennepin has been severely and justly criticized for imposture and plagiarism, his works, according to Thwaites, still stand as "invaluable contributions to the sources of American history; they deserve study, and to this day furnish rare entertainment. We can pardon much to our erratic friar, when he leaves to us such monuments as these." The maps are of great importance for the cartography of the Midwest. "John Wedderburn assumed the name of Halkett in 1779 when, upon the death of his cousin Sir Peter Halkett, he succeeded to the baronetcy of Pitfirrane ... Halkett was appointed a member of the HBCs London committee in November 1811, a few months after the company had granted a large tract of land around the Red River to Selkirk for the establishment of a colony. By training and temperament Halkett was eminently suited to become the main British defender of Selkirks efforts in North America, and he spent most of the years 1815 to 1820 trying to counteract what he considered misleading and false statements circulated by the North West Company about Selkirks character and his work ... In 1817 Halkett published, for private circulation, the unsigned Statement respecting the Earl of Selkirks settlement, in which he blamed the destruction of the colony on the NWC and its agents ... In 1825 Halkett published Historical notes respecting the Indians of North America: with remarks on the attempts made to convert and civilize them. It is a sympathetic account based on the writings of Claude-Charles Le Roy de La Potherie, dit Bacqueville de La Potherie, Pierre-François-Xavier de Charlevoix, and others [including Hennepin], with Halkett's suggestions for the civil and religious advancement of Indians. He recommended a more sympathetic approach to the native way of life and emphasized that changes should be made slowly and cautiously, attitudes which have only recently been adopted in relationships with Indians. His interest in North American native culture is also reflected in his collection of aboriginal artifacts" (Dictionary of Canadian Biography).