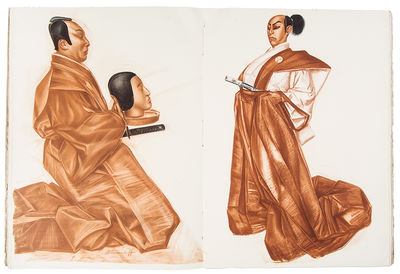 One of 500 numbered copies: illustrations in sanguine and black of Kabuki actors by Iacovleff.

Kabuki is a traditional Japanese theater dating from the 17th century marked by dramatized singing, dancing, and acting and elaborate make-up and costumes. It is primarily meant to entertain and actively and visually engage the audience and to emphasize the actors' performance skills. As kabuki gained popularity, it became established seriously as an art form and was known as the people's theatre, as its main audience was the common townsperson or farmer. In this work, Iacovleff and Elisseeff describe and illustrate the beauty of this classic Japanese drama, most likely inspired by each of their travels to Japan. Alexandre Iacovleff was a Russian painter born in Saint Petersburg and educated at the Imperial Academy of Fine Arts. He was an active participant in the Russian art scene, particularly in his work as part of art magazine and movement Mir iskusstva but left Russia in 1917 to begin a long period of traveling around the world. Between 1917 and 1919, he traveled to Mongolia, China, and Japan, eventually settling in Paris in the early 1920s, and later travelling again throughout Asia, the Middle East, Africa, and America. Serge Elisseeff was a Russian-French professor at Harvard University who was one of the leading scholars of Japanese studies in the United States. He attended the University of Berlin and finished his degree at Tokyo Imperial University (now University of Tokyo), where he was the first Western graduate to study Japanese and first Western graduate student. (Inventory #: 38159)
$4,250.00 add to cart or Buy Direct from
Donald A. Heald Rare Books
Share this item
Donald A. Heald Rare Books
Offered by