A Sequel to the North-West Passage, and the Plans for the Search for Sir John Franklin 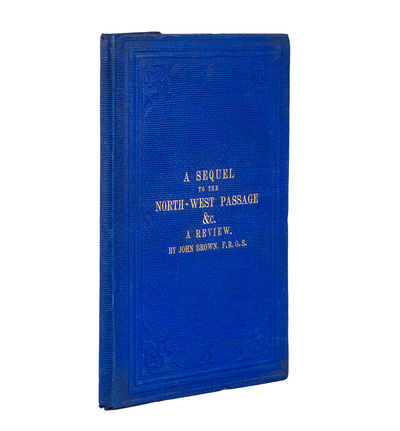 by BROWN, John (1797-1861)
London: E. Stanford, 1860. 8vo. [4], 3, [1], 62, [6]pp. Map and folding plate. Publisher's blue cloth, covers blocked in blind and gilt, yellow endpapers. Rare separately-issued account of the Franklin search expedition of the Fox under McClintock. Brown included this work as part of the second edition of his The North-West Passage, and the Plans for the Search for Sir John Franklin (London:1860). The present issue, however, is the very rare separately-issued first edition of the Sequel, unrecorded as such in Arctic Bibliography. An important work, as it includes an account of McClintock's explorations (1857-9) during which the first artefacts from the Franklin expedition were recovered. (Inventory #: 38082)
$3,600.00 add to cart or Buy Direct from
Donald A. Heald Rare Books
Share this item
Donald A. Heald Rare Books
Offered by