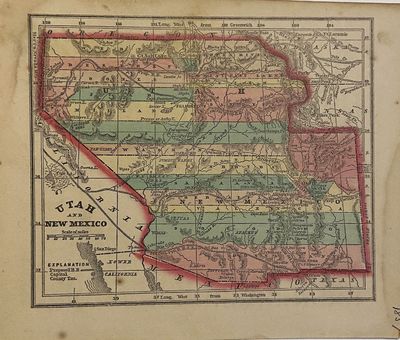 by COLBY, Charles G.
New York: Samuel Gaston, 1857. unbound. Miniature map. Engraving with original hand coloring. Image measures 6" x 5.25". This map shows the territories of Utah and New Mexico shortly after the Treaty of Guadalupe Hidalgo in 1848, which gave the United States ownership of the region from Mexico. Published in 1857, the map shows the development that has taken place in the intervening decade, with the territories divided into hand-colored counties and a bright red border highlighting the boundaries of the territories at this period. Cities and rivers are labeled, and proposed railroads are shown with hatched lines as per a key below in the title in the lower left corner of the map. Relief shown by hachures. Also noted are the sites of historical events and Native American tribes. The map appeared in Colby's "Diamond Atlas" and is in good condition with full margins and no chips or tears. Very slight foxing and stains to margins. Charles G. Colby (1830--1866) was an American map-maker active in the mid-19th century who is known best for his miniature maps. His "The World in Miniature," otherwise known at the "Diamond Atlas,"focused on the western hemisphere. His main focus was the United States, and he produced individual maps for each of the states. The atlas also includes maps of the hemispheres, several thematic world maps, North America, Canadian provides, the West Indies, and Central and South America. This map belongs to a vibrant period of American westward expansion. (Inventory #: 294394)
$50.00 add to cart or Buy Direct from
Argosy Book Store
Share this item