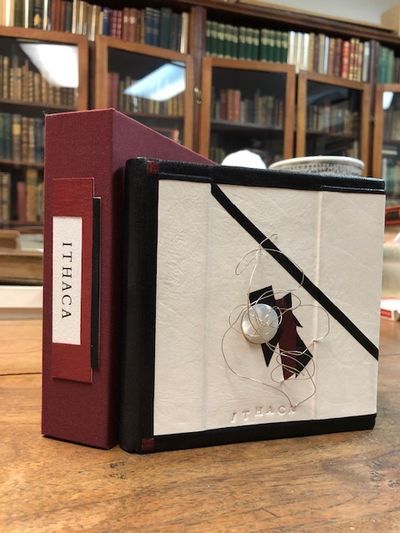 signed Black goatskin and white calf, tooled with title, over boards. Extended back board. Geometric calf onlay to cover, with three-di

by [Allix, Susan]. Cavafy, Constantine
[London: Susan Allix, 2018] One of 18 total copies, signed and numbered by Susan Allix on the colophon. This is a special copy featuring the goatskin-and-calf cover, the three-dimensional accents, and the deluxe clamshell box; neither the colophon nor Allix's website note a limitation for the special copies.. Black goatskin and white calf, tooled with title, over boards. Extended back board. Geometric calf onlay to cover, with three-dimensional accents of mother-of-pearl and gold and silver wire. Pastedowns are dyed Nepalese paper; free endpapers are sand-colored, textured stiff paper.In a wine-red cloth clamshell case with paper and calf onlay. Interior of case includes raised supports to protect the three-dimensional cover and is lined with the same sand-colored paper stock as the free endpapers. . 5.75 inches by 5.5 inches. . Hand-set and letterpress printed in black, red and violet on Zerkall paper; with geometric cut-out accents, 2 fold-out leaves, and black Japanese paper collages. Also with 3 carborundum prints, 3 hand-colored etchings, and 1 ink painting. A fine copy. Ithaca" by C. P. Cavafy (1863–1933) was originally published in Greek in 1911 and later appeared in English in The Complete Poems of C. P. Cavafy (1948). The English translation of "Ithaca" was popularized in the United States by Jacqueline Kennedy, who was very vocal about her love for the poem. Susan Allix's Ithaca is an abridged version of the poem, which was inspired by Odysseus' return to his home country in the Odyssey. The opening lines of the poem, as it is printed in this item, read: "When you set out on your journey to Ithaca, pray that the road is long, full of adventure, full of knowledge." (Inventory #: 16699)
$1750.00 add to cart or Buy Direct from
Michael R. Thompson Rare Books
Share this item
Michael R. Thompson Rare Books
Offered by

by Gregory I, Pope