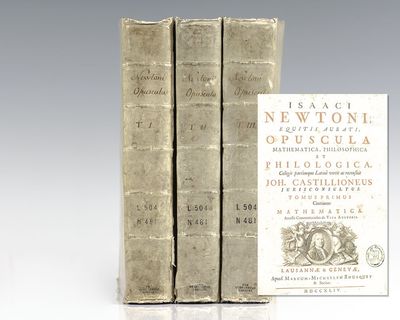 by Newton, Isaac
Lausanne and Geneva: Aoud Marcum-Michaelem Bousquet & Socios, 1744. First edition of the first collected edition of Newton's writings, which has been hailed as "a fine piece of bookmaking" (Babson). Quarto, bound in contemporary velum, contains 64 folding engraved plates; 2 folding letterpress tables. In very good condition. Small stamps to the spine and title pages. Rare in contemporary binding. English mathematician, astronomer, theologian, author and physicist Sir Isaac Newton is widely considered one of the most influential scientists of all time and a key figure in the scientific revolution. In one of his most important works, Philosophiae Naturalis Principia Mathematica, Newton formulated the the laws of motion and universal gravitation that formed the dominant scientific viewpoint until being superseded by the theory of relativity. (Inventory #: 109523)
$4800.00 add to cart or Buy Direct from
Raptis Rare Books
Share this item

Ida Broke: The Humor and Philosophy of Golf.

by Evans, Chick and Barrie Payne

by Johnson, Lyndon B. Photographs by Ansel Adams