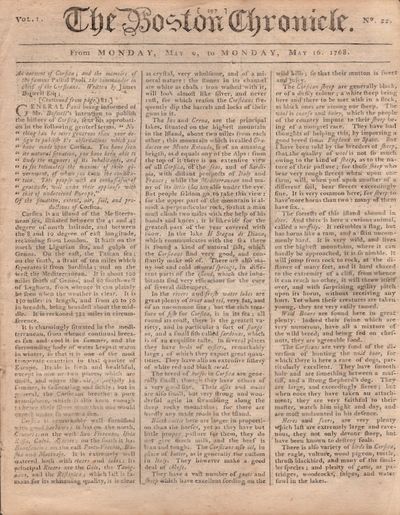 by [Mein and Fleming]
Boston: Printed by Mein and Fleming, 1768. Newspaper. Very good. Approx. 11" x 9". Single issue. Pages 197-204. Light toning. Contents include "An Account of Corsica", troubles in Frankfurt, news from Italy, Ireland and London, etc. Also included are placed advertisements including notice of a thank you letter (ad for sale and not included in this paper) from the city of Boston to the author on the publication of "Letters From A Farmer in Pennsylvania to the Inhabitants of the British Colonies" written by John Dickinson. Colonial imprint. From Delaware dot gov: Dickinson's most famous contribution as the "Penman" and for the colonial cause was the publication of a series of letters signed "A FARMER." The letters were published over a period of ten weeks in late 1767 and early 1768 with the first letter appearing in the Pennsylvania Chronicle on December 2, 1767. In the letters, Dickinson argued, amongst other things, that the Townshend Acts were illegal because they were intended to raise revenue, a power held only by the colonial assemblies. His arguments were a collection of ideas that were written in a clear and concise manner which the general population could understand. Collectively, the letters were called "Letters from a Farmer in Pennsylvania to the Inhabitants of the British Colonies." The letters were shortly thereafter published in pamphlet form and reprinted in almost all of the colonial newspapers. They were read widely across the colonies and in Britain and France. This quickly made John Dickinson famous. After reading the "Letters", Voltaire, the French philosopher, compared Dickinson to Cicero, an honored Roman statesman, orator, and philosopher. At the Boston town meeting in March of 1768 Samuel Adams and others spoke of the author by saying "that the thanks of the town be given to the ingenious author of a course of letters... signed 'A FARMER,' wherein the rights of the American subjects are clearly stated and fully vindicated: ...members of a committee [are] to prepare and publish a letter of thanks.". (Inventory #: 18310)
$125.00 add to cart or Buy Direct from Americana Books
Share this item

Open the Gate and Roam Cabarrus With Us