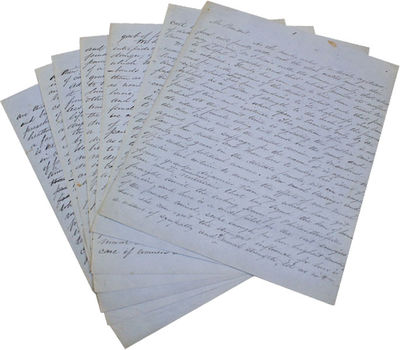 by [WOMEN'S HISTORY & LITERATURE - SUFFRAGE - CRITICS] "KENT"
N.p., n.d. but ca. 1870s. Extensive and rather rambling unsigned letter or lyceum address draft "To the President" (though which President, and of what, is not stated), in which the author, quite possibly a public figure based on references to his "detractors," strongly argues against women's suffrage: "would we have our females eschewing their more gentle nature, hardening the finer sensibilities of her mind by rushing to the ballot box? And mingling in the excitement of an election, thereby throwing off the garb of female modesty and timidity? I think not." Though the first leaf has the appearance of a clean copy, the author's hand begins to turn sloppy with a number of manuscript corrections in the later leaves. Due to a lack of contemporary references (Mary Wollstonecraft is the only person explicitly mentioned), we cannot place with certainty a date or author for the item, though the hand, ink, and paper, and reference to women tending to wounded soldiers during wartime indicate this was penned within a few years of the Civil War, as the women's suffrage movement was beginning to gather steam in the 1870s. Autograph letter on seven leaves of blue laid sheets (25x20.5cm.), rectos only, "Kent" blind-stamped at top left-hand corner of each leaf; occasional faint soil spots, minor shallow creases and faint fold lines, else Very Good or better. (Inventory #: 43875)
$650.00 add to cart or Buy Direct from
Lorne Bair Rare Books
Share this item