Argonauts of the South; Being the Narrative of Voyagings and Polar Seas and Adventure in the Antarctic with Sir Douglas Mawson and Sir Ernest Shackleton 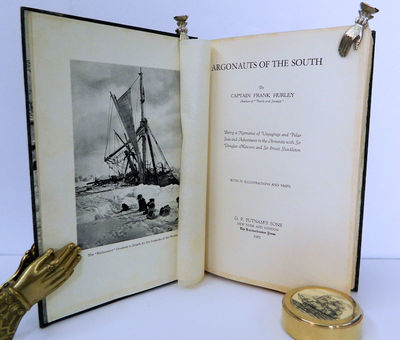 by Hurley, Frank
New York: G.P. Putnam's Sons, 1925. First Edition. Very Good. 8vo [9.5x6.5in]; [2], xv, [1], 290 pp., [2], frontispiece of Endurance crushed in the ice, 46 plates of 71 images and 5 illustrations, 2 folding maps; Dark green cloth covers with gilt lettering on front and spine, blind stamped borders on front, image of seals and penguins on ice flow in Commonwealth Bay on front end papers and rugged landscape of So. Georgia Is. from high ridge line above Stromness Harbor and Bay, top edge gilt and foredge untrimmed; Minor shelf wear, covers, spine and gilt lettering darken with age and soling, minor rubbing to back cover with some wrinkling of cloth, old stain along edges of back end papers. [Rosove 178.A1, Conrad p.205]. James Francis (Frank) Hurley (1885-1962) ), adventurer, photographer and film maker, in 1911 was asked to by the photographer on Sir Douglas Mawson's Australasian Antarctic Expedition 1911-1913 (Aurora). This expedition was to explore to the west of the Scott and Shackleton expeditions in the McMurdo Sound. The main base was established at Cape Denison 142 and the western base 600 kilometers further west. Hurley worked in difficult conditions of unrelenting cold and katabatic winds to take still images and movie film. After the expedition, Hurley created exhibitions of his images and films in major cities of the world. In London, Shackleton was impressed with the exhibition and asked Hurley to join him on the Imperial Trans-Antarctic Expedition 1914-1917, the Weddell Sea Party (Endurance) and he accepted. The expedition did not achieve the objectives as the Endurance was beset and crushed in the ice covered Weddell Sea before reaching land. All but 150 plates of Hurley's still images and some pocket camera images survived the 9 month trek across the ice dragging overloaded lifeboats to reach open water and sail for desolate Elephant Is. to await an uncertain rescue. Hurley and all the other men survived the ordeal when rescued by Shackleton after his miraculous 800 mile sea voyage to the nearest whaling station on South Georgia Is. Hurley's images from the Mawson and Shackleton expeditions have become iconic images in telling the stories of the expeditions. (Inventory #: 11204)
$633.00 add to cart Available from
David Spilman Fine Books
Share this item