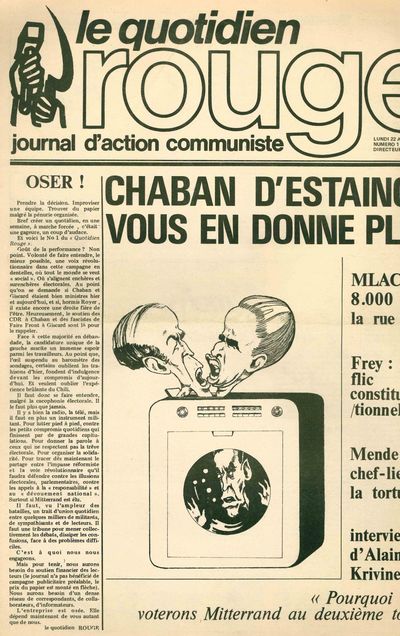 A complete run in 22 issues of the newspaper which ran on a daily basis, in addition to the weekly Rouge, during the period of the 1974 Presidential elections, each issue 8 pp., edited by Daniel Bensaid, covering the election and related events. Illustrated profusely throughout from photographs and drawings. Some slight yellowing, minor edgewear with some small closed tears, overall excellent. Folio. Original newsprint self-wrpps. Paris (La Ligue Communiste) 1974. Presidential elections were held in France in 1974, following the death of President Georges Pompidou. Pompidou, having previous served as Prime Minister under President de Gaulle, was elected President of France in 1969 for a seven-year term. However, he died in office on April 2, 1974. The Leftist groups of the Socialist Party, PCT, and the Movement of Left Radicals united behind the candidacy of Socialist leader François Mitterand. On the right, there was less unity, and four men declared intention to run: Gaullist Prime Minister Jacques Chaban-Delmas, Chairman of the National Assembly Edgar Faure, Jean Royer representing the ultra-conservative branch of the Gaullist party, and Economy Minister and leader of the Independent Republicans Valéry Giscard d'Estaing. Giscard d'Estaing got the nomination in the first round of voting, held on May 5th. For the first time in the history of French presidential elections, a radio-TV debate was organized and broadcast between the two candidates. Giscard d'Estaing was elected by a very small margin of votes, still the closest in French history, in the second round of voting on May 19th. Incredibly scarce; as of January 2020, WorldCat does not locate a single holding of this title in North America. (Inventory #: 50482)
$2500.00 add to cart or Buy Direct from
Bernett Penka Rare Books
Share this item