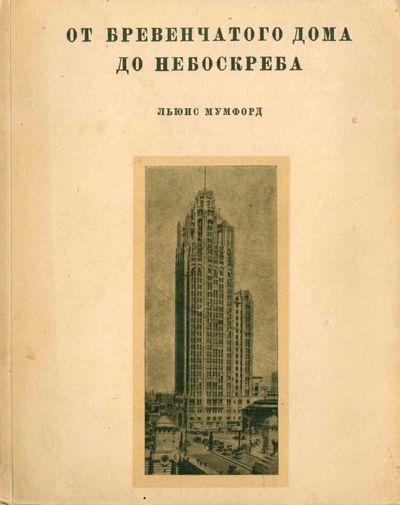 by Mumford, L'iuis and B.A. Katlovker trans
Moscow: Izdatel'stvo vsesoiuznoi akademii arkhitektury, 1936. Octavo (21 × 17 cm). Original photo-illustrated wrappers; 169, [3] pp. with 11 photo-illustrations. Light soil and foxing to wrappers, else very good. First and only edition. First Russian translation of the now classic sketch on the history of American architecture, by the literary and architecture critic Lewis Mumford (1885-1990). Originally published in 1925 as "Sticks and Stones: A study of American Architecture and Civilization," the text presents a devastating critique of capitalist architecture with the skyscraper as its purest expression. The Russian introduction by David Arkin (1899-1957), Soviet historian of architecture, applauds the author for his critique of the "compensatory architecture" of "monumental facades" that "hide the suffering of the proletarian masses." However Mumford's vilification of the machine and mechanization is criticized in the introduction as being too reductive. Instead, Arkin argues that it is the inability of capitalist countries to make machines serve humanity, rather than mechanization itself, that is to blame. With the introduction making a case for the skyscraper, this translation was published in the same year as the start of construction of the famous Palace of the Soviets, an administrative center of the Soviet Union that was to become the tallest building in the world. The construction of the building went on from 1932 to 1937, stalled due to the start of WWII, and was never completed. As of December 2019, no copies found in KVK and OCLC. (Inventory #: 50298)
$750.00 add to cart or Buy Direct from
Bernett Penka Rare Books
Share this item