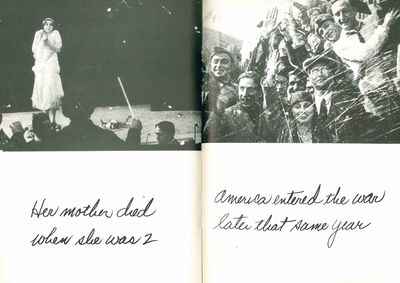 by Oursler, Stephanie
Artist's book, unpaginated, published in conjunction with Oursler's 1975 exhibition of the same name, held at Rome's Galleria's Internazionale d'Arte Moderna, with foreword by Italo Mussa in Italian and English, the exhibition catalogue comprised of reproductions of appropriated black and white photographs, each accompanied by a reproduced handwritten caption in English which when put together make up the text of several poems, the captions translated into Italian at the rear of the catalogue; together with exhibition announcement laid in. 8vo. Original printed wrpps., some extremely minor soiling and tanning. Rome (Galleria Internazionale d'Arte Moderna) 1975. Inscribed, signed by Oursler, and dated 20/3/75 on first blank. The 5 Cuts exhibition occurred in the same year as Oursler published her brilliant artist's book, "Un Album di Violenza", a key artist's book of the 1970s. Oursler was a political activist who worked with the Black Panther Party and served as the former secretary of the Peace & Freedom Party before moving to Italy. Very scarce; as of January 2020, WorldCat locates only two holdings of this title in North American libraries. (Inventory #: 50484)
$950.00 add to cart or Buy Direct from
Bernett Penka Rare Books
Share this item