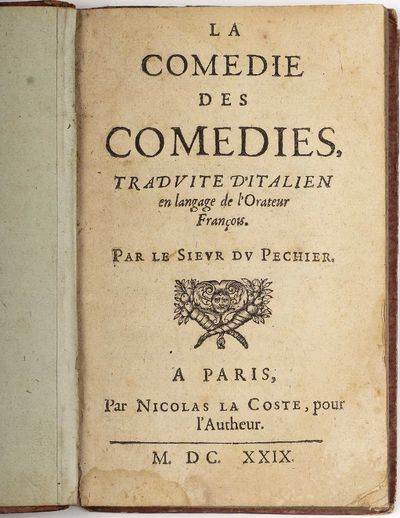 by Du Peschier, Nicolas [compiler].
La comédie des comédies, a four-act comedy in prose and verse for eight characters, is cleverly structured as an Italian comedy translated into French. The play, however, is not translated from Italian but consists of the frequent quotation from the letters of the essayist Jean-Louis Guez de Balzac. Balzac's "swelling phrases and metaphorical expressions are cleverly caricatured" (Lancaster, 367).

The model for the play is an Italian farce in which le Docteur (modeled on Balzac) has an inflated notion of his erudition. It is a rare theatrical satire probably compiled by a member of the Feuillant sect. La comédie des comédies was never played in theatres.

full description: Cut and paste the link below to your browser: