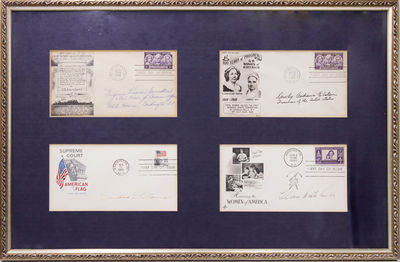 by O'Connor, Sandra Day, et al.
Seneca Falls, NY and Washington D.C., 1981. Each approximately 3 1/2 x 6 1/2 inches. Fine, matted and framed together to 13 x 20 inches. Each approximately 3 1/2 x 6 1/2 inches. American Conservative Women. A handsomely framed group of four first day covers signed by prominent 20th century American Conservative women. Includes a Supreme Court American Flag first day cover, December 17, 1981, signed by Sandra Day O'Connor (b. 1930), who became the first woman to serve on the court when she was appointed by President Reagan in 1981; an "Honoring the Women of America" cover, 1960, signed by Clare Boothe Luce (1903-1987), author of "The Women" and the first woman appointed to a major ambassadorial post; and two post-marked from Seneca Falls on July 19, 1948, with stamps and envelopes commemorating the centennial of the Women's Rights Convention there; one is signed by Virginia Knauer (1915-2011) as Specialist to President Nixon for Consumer Affairs, the other is signed by Dorothy Andrews Elston (1917-1971) as Treasurer of the United States. (Inventory #: 317352)
$500.00 add to cart or Buy Direct from
James Cummins Bookseller
Share this item
James Cummins Bookseller Inc.
Offered by

Black Lamb and Grey Falcon. A Journey through Yugoslavia

The Tourist in Portugal