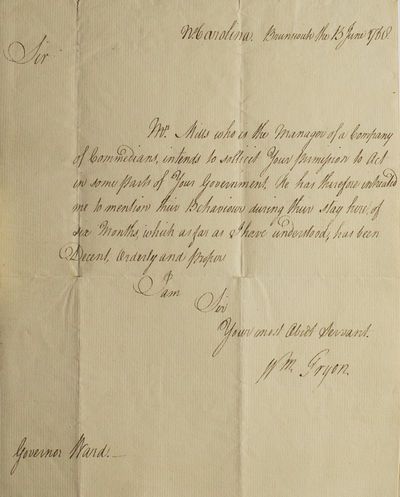 by Tryon, William
Brunswick, North Carolina, 1768. 1 p. pen and ink on bifolium laid paper. Old folds. Fine, removed. 1 p. pen and ink on bifolium laid paper. THE FIRST PROFESSIONAL THEATRICAL GROUP TO PERFORM IN CANADA. Tryon's letter to Rhode Island Governor Samuel Ward reads in part: "Mr. Mills, who is the manager of a Company of Commedians, intends to solicit your permission to act in some parts of your Government. He has therefore entreated me to mention the Behaviour during their stay here of six months, which, as far as I have understood, has been decent, orderly, and proper..." William Tryon was born on June 8, 1729 at the family's seat at Norbury Park, Surrey, England. Though he had little formal education, his marriage to the daughter of a former East India Company Governor and his family's political connections ensured his advancement in military and civil affairs. Tryon was appointed Governor of North Carolina in July, 1765. He is credited for several improvements to the colony during his 6-year tenure but is probably most notable for the construction of an opulent new Governor's mansion dubbed "Tryon's Palace," and his suppression of the North Carolina Regulator uprising in 1771. Tryon would later go on to serve as Governor of New York, become embroiled in an ill-conceived plot to kidnap General George Washington, and gain notoriety as a British major general during the Revolution, particularly in Connecticut, where he burned and plundered Fairfield and Norwalk and advocated attacks on civilian targets. But the war was still seven years away when Tryon took quill in hand to pen a letter to his fellow governor in Rhode Island on behalf of the manager of a theatrical group that had been performing in New Brunswick (the group may have been the catalyst for the establishment of a playhouse in Halifax, North Carolina, which appeared on a survey map in 1769.) Referred to alternately as "Mr. Mills Company" and "Mr. Mills and Mr. Giffards Company" the travelling theatrical group is believed to have originated in London. Despite Tryon's endorsement, they were apparently spurned by the puritans of Rhode Island and instead arrived in Halifax, Nova Scotia, in August 1768. The company staged two performances a day for ten weeks in Halifax, and is the first professional theater company to perform in Canada. Overshadowed by more well-known British theatrical groups of the day that were touring the colonies, such as Douglas's "American Company" and William Verling's "New American Company," very little has been written about Mills Company of Comedians. In their book, The Colonial American Stage, 1665-1774: A Documentary Calendar (Fairleigh Dickinson University Press, 2001), Odai Johnson and William J. Burling write of Mills' troupe that "...little corroborating evidence of the company is extant beyond two letters by Governor William Tryon." This appears to be a retained copy, without seal or address, of one of those two known letters. The sent copy is in the Rhode Island Archives. The Correspondence of William Tryon, II, p. 133 (Inventory #: 304856)
$7500.00 add to cart or Buy Direct from
James Cummins Bookseller
Share this item
James Cummins Bookseller Inc.
Offered by

The Land of the Veda: Bing Personal Reminiscences of India; Its People, Castes, Thugs, and Fakirs; Its Religions, Mythology, Principal, Monuments, Palaces and Mausoleums: Together With the Ancidents of the Great Sepon Bebellion And Its Results to Christianity and Civilization

How to work with the Microscope