THE SCRIPTURE-BISHOP VINDICATED: A Defence of the Dialogue Between Praelaticus and Eleutherius, Upon The Scripture-Bishop, Or The Divine Right of Presbyterian Ordination and Government: Against The Exception of a Pamphlet, Intitled The Scripture Bishop Examin'd by Eleutherius, V.D.M. [pseudonym of Jonathan Dickinson]. In a Letter to a Friend. [Half-title: Praelaticus Triumphatus. A Vindication of Presbyterial Ordination & Governement.]. Done by way of Dialogue between Eusebius and Eleutherius; together with two letters on this subject." By Phileluth Bangor. V.E.B. [pseudonym of Thomas Foxcroft] 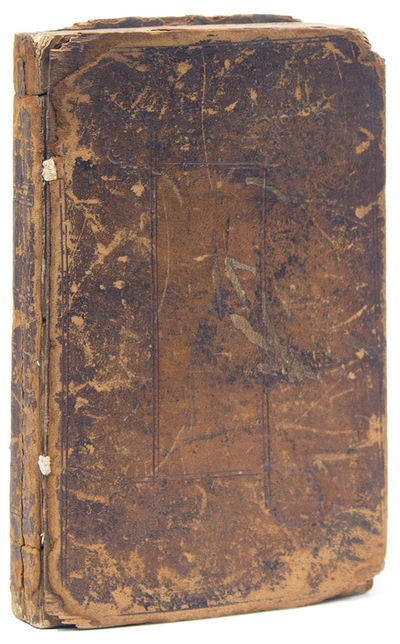 by [Dickinson, Jonathan]
Boston: Printed by S. Kneeland ...D. Henchman, [Cornhill], 1733. First edition, with half-title. 125; 158 pp. 1 vols. 16mo (6-1/2 x 4 inches (16.5 x 10 cm.). Contemporary panelled calf, retaining blanks. Worn, binding holding by cords bearly, early ownership signature, booklabel with initials, Signed Maria Weston, Ezra Weston. First edition, with half-title. 125; 158 pp. 1 vols. 16mo (6-1/2 x 4 inches (16.5 x 10 cm.). Jonathan Dickinson (1688-1747) was born in Hatfield, Massachusetts, and attended one of the earliest classes at Yale College, graduating in 1706. While there are not a lot of details of his early life, he did end up preaching to a group of New England Congregationalists in 1708 in Elizabeth Town, New Jersey. Although he accepted a blend of Puritan Calvinism theology, he was flexible enough to also accept "more contemporary experiences of evangelical revivalism." He advocated a 'lively faith', but took account of a person's age and intellectual development. Thomas Foxcroft (1697-1769) was born in Boston, and is known to have converted to Congregationalism while in college, graduating from Harvard in 1714. Historical accounts indicate he was known for his virtue and piety, and developed a close relationship with Cotton Mather. In fact, Mather sought Foxcroft's help when he was having problems with his teenage son. He published a number of tracts in the 1720s and 1730s, often promoting a strong Congregational foundation among the young in New England. In the 1730s, he and Benjamin Colman were considered the top ministers of their generation. However, in 1736 he suffered a stroke, and was never able to return to his previous level. Evans 3651 & 3654; Sabin 22115 (Inventory #: 259281)
$900.00 add to cart or Buy Direct from
James Cummins Bookseller
Share this item
James Cummins Bookseller Inc.
Offered by

The Land of the Veda: Bing Personal Reminiscences of India; Its People, Castes, Thugs, and Fakirs; Its Religions, Mythology, Principal, Monuments, Palaces and Mausoleums: Together With the Ancidents of the Great Sepon Bebellion And Its Results to Christianity and Civilization

How to work with the Microscope