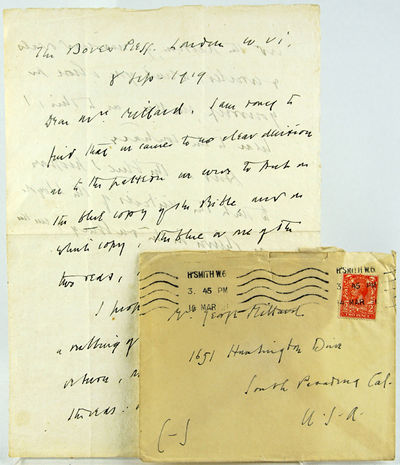 by Cobden-Sanderson, T. J.
London, 1919. Single 9 1/4 by 6 1/2 inch sheet. Dated September 8, 1919. Cobden-Sanderson directs Millard on his desired bindings for three copies of the Doves Bible, one in blue and two in red. For two, the blue and one of the reds, Cobden-Sanderson provides one of his patterns, which he states he has enclosed as a rubbing. The pattern in question is possibly the one reflected on Tidcombe's DB820, an adaptation of patterns on the 1907 The English Liturgy (DB673) and Sartor Resartus (DB690). On the other red, he asks that Millard move forward with a design of "mirrored ovals and circles, which [he] chose by [himself". He also suggests including the initials of Mr. Lloyd, a customer, on the blue binding, but defers to Millard's opinion. In addition to having commissioned two houses from Frank Lloyd Wright -- one in Chicago, the other in Pasadena -- George and Alice Millard were prominent booksellers in the early twentieth century. Included with the letter is a envelope addressed to Millard, but dated from 1921. Fine. (Tidcombe DB820). (Inventory #: 29184)
$550.00 add to cart or Buy Direct from
Bromer Booksellers
Share this item