Hetch Hetchy, Its Origin and History 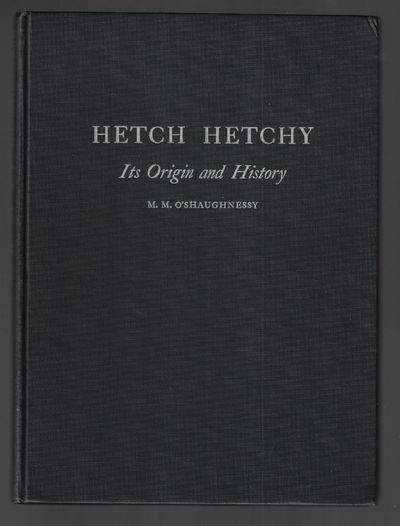 by O'Shaughnessy, M.M. [Michael Maurice]
San Francisco: Recorder Printing and Publishing Company, 1934. First Edition. Hardcover. Near fine. 9 x 12 inches, 133 pp., with color frontispiece, occasional line drawings in the text. Original gray cloth boards slightly bumped at corners, internals clean and sound. No dust jacket (likely as issued). O'Shaughnessy (1864-1934) was city engineer for the city of San Francisco during the first part of the twentieth century and developed the controversial Hetch-Hetchy water system. "Hetch Hetchy began with a dam in the Yosemite and was linked to more than 150 miles of tunnels, pumping stations and pipelines to San Francisco. The project involved building not just a dam, but also a 68-mile railroad, several smaller dams, an aqueduct 156 miles long that included 85 miles of tunnels, some through solid granite, hydroelectric generating plants and transmission lines. That the dam was planned for a valley in Yosemite National Park caused significant opposition. One of the most potent opponents was the Sierra Club and its founding President, John Muir. After two vetoes by Teddy Roosevelt, on December 19, 1913, Woodrow Wilson signed the Raker Act. Construction began in 1914. Water from the dam, named for O'Shaughnessy, crosses the foothills, the San Joaquin Valley, the coast ranges and San Francisco Bay through the Pulgas Water Temple and is stored in the Crystal Springs Reservoir" (Wiki). This book provides a detailed history of the various stages of the project's planning, financing, and construction, describes the controversies and other obstacles encountered, and provides technical details on how power was generated, transmitted, and sold. Rocq 10767. (Inventory #: 20749)
$135.00 add to cart or Buy Direct from Walkabout Books
Share this item

Freedom's Lyre: Or, Psalms, Hymns, and Sacred Songs for the Slave and His Friends