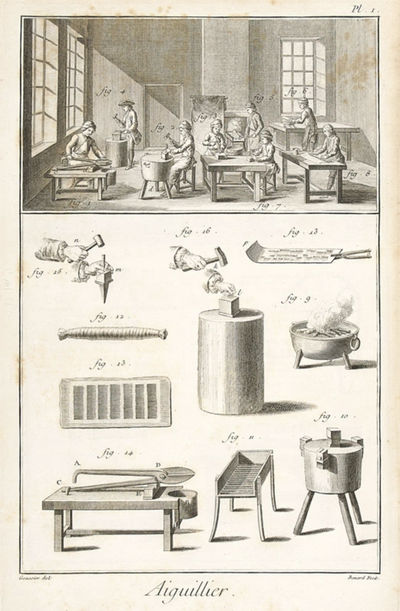 by Diderot, Denis.
Paris (1762). Folio 253 x 393mm. 3 pages of descriptive text & 4 loose plates with their accompanying text sheet. Slight browning to margins, a little spotting otherwise very good. § The 4 plates and descriptive text for the entry of Aigullier, Aigullier-Bonnetier & Amydonnier from volume 1 of plates. There are two plates entitled Aiguiller, and these are numbered 1-2. There is one plate entitled Aigullier-Bonnetier and another entitled Amydonier, and neither of these is numbered.3 pages (203-205) from volume I of the Encyclopédie (1751) including Aiguille de tailleur.These four plates from Diderot's Encyclopédie show the 18th century processes followed in the production of needles, needle caps, and starch. Each plate is headed with a workshop scene, and displays clearly the tools used. The plates are accompanied by a lengthy article titled Aiguille and contributed by Antoine Louis, famous for designing the first prototype of the guillotine. This is followed by a short subsection by Diderot on les Couteliers, the profession of his father. (Inventory #: 122467)
$220.00 add to cart or Buy Direct from
John Windle, Bookseller
Share this item