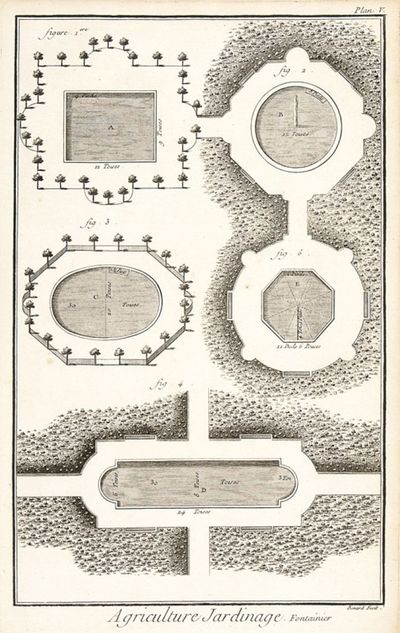 by Diderot, Denis.
Paris (1762). 32 pages of descriptive text & 4 loose plates. Slight browning tomargins, a little spotting otherwise very good. § The 4 plates and descriptive text for the entry of Agriculture, Fontainer from volume I of plates. Plates are numbered as 5 plans with 2 plans on sheet 2.27 pages (81-107) from volume VII of the Encyclopédie (1757) including Origine des fontaines , Détermination de la quantité des vapeurs qiu s'élevent de la mer and La pénétration de l'eau pluviale dans les premieres couches de la terre1 page (349) from volume XV of the Encyclopédie (1765) including Sonde dont il se sert pour forer la terre & trouver les eaux3 pages (99-101) from volume III of the Supplément à l'Encyclopédie (1777) which includes Les fontaines des jardinsWith some browning to a few leaves.This suite of plates examines closely the eighteenth-century method of calculating the pressure required to produce a fountain with a certain height of water column. The plates demonstrate the complicated process of measuring the altitudes and gradients at which the water would fall through the pipes laid, and the hydromechanics involved in devising a water container of the right shape and size. A further plate displays some popular fountain garden layouts.The plates are accompanied by a series of important and extensive articles on fountains. The first of these, and the most substantial, is by D'Alembert. Co-editor of the Encyclopédie, he had already distinguished himself as a mathematician, mechanician, and physicist. D'Alembert's formula was named after him, and one field which he had a great influence in was fluid mechanics. Here he expertly tackles the difficult topic of fountains and their creation, examining the mathematics and physics involved.Following articles include Fontaines Artificielles by Antoine-Joseph Desallier D'Argenville, who wrote around six hundred articles for the project, mostly on gardening, Diderot's Fontaine Domestiques, and Jacques-François Blondel's description of fountains and their role in architecture. In all, this set of articles includes contributions by some of the most distinguished of the many Encyclopédists. (Inventory #: 122535)
$240.00 add to cart or Buy Direct from
John Windle, Bookseller
Share this item