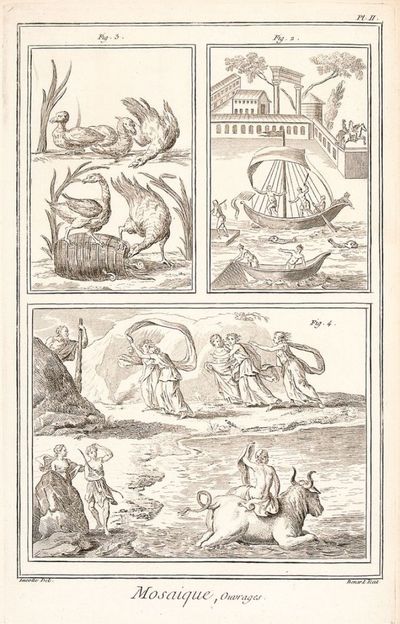 by Diderot, Denis.
Paris (1771). Folio 253 x 393mm. 14 pages of descriptive text & 5 loose plates with their accompanying 2 text sheets from the volume of plates. Slight browning to margins, a little spotting otherwise very good. § The 5 plates and descriptive text for the entry of Mosaïque from volume VIII of plates. Plates are numbered 1-5. Plate 4 is a double plate.1 page (659) from volume VIII of the Encyclopédie (1765) including Les Romains11 pages (78, 79 & 741-750) from volume X of the Encyclopédie (1765) including information on Compartimens de pavés en marbre and Mosaïque en général.1 page (193) from volume XII of the Encyclopédie (1765) including L'usage des pavés en mosaïque à Rome.1 page (353) from volume III of the Supplément à l'Encyclopédie (1777) which includes Mosaïque de Herculanum.Included with these plates are several relevant entries on Mosaics, including the main ten-page article by Chevalier Louis de Jaucourt. The article primarily concerns the role of mosaics in Christendom philosophy and also their manufacture. Despite focusing largely on the sciences, Jaucourt has been regarded as an important philosopher as well. The article for mosaics is therefore a good example of this polymath's varied interest and specialties. The 5 plates largely concern the workmanship of this art and the atelier itself. 8 mosaic patterns are also reproduced, including Europe Raised by Jupiter, Neptune and his Trident and a Barge on the Nile. There is one double plate depicting the Nile Mosaic of Palestrina, with various useful annotations. Thought to be the earliest Roman depiction of Nilotic scenes, close examination suggests that it was produced in the reign of Sulla (ca. 100 B.C). It is important for a number of reasons, and could possibly be one of the mosaics referred to by Pliny in his Naturalis Historiœ. Having remained in the Barberini family since the 17th-century, the mosaic can now be found in the Museu Nazionale Prenestino. (Inventory #: 122487)
$470.00 add to cart or Buy Direct from
John Windle, Bookseller
Share this item