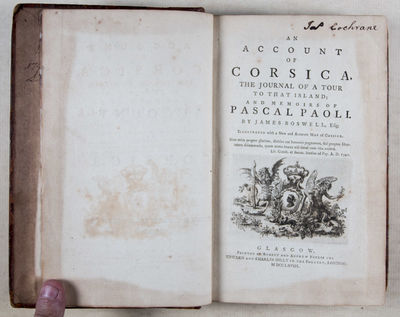 by Boswell, James
Glasgow: Printed by Robert and Andrew Foulis for Edward and Charles Dilly, 1768. First edition. Hardcover. g- to vg. Octavo. xxi, (1) 382 (1 blank)pp., 1 folding map. Rebacked with brown calf retaining the original leather boards with gilt lettering on brown label and gilt ruling on spine; raised bands. Printed half-title. Engraved title vignette. Final blank. With a new and accurate map of the Island of Corsica inscribed to James Boswell by Thomas Phinn. Bookplate of the American statesman and 11th Chief Justice Charles Evans Hughes on inside front cover, and his signature at top of half-title. Boswell was a Scottish biographer, diarist, and lawyer, best known for his biography of Samuel Johnson. Being a major supporter of Corsica's independence he traveled to Corsica to meet one of his heroes, the independence leader Pasquale Paoli. This work made Boswell famous> It is a lively account of his Quixotic adventures in Corsica and his association with General Paoli... for whom he endeavored to get official British assistance. His childish pleasure in being the chief sponsor of this wild island struggling to become a nation led him to wear a Corsican costume at Garrick's anniversary celebration in honor of Shakespeare held in 1769." (Cox I, p. 138). Binding with wear along edges of retained boards, some scuffing and chips, frayed at lower corner at foredge of back cover. Three line inscription inked to inside front cover, signature of previous owner on verso of front free endpaper. Free endpaper at front and back, half-title and title page with browned margins. Map with one inch closed tear w/o any loss of map. Binding in overall good-, interior in very good condition. (Inventory #: 46235)
$650.00 add to cart or Buy Direct from
Eric Chaim Kline Bookseller
Share this item