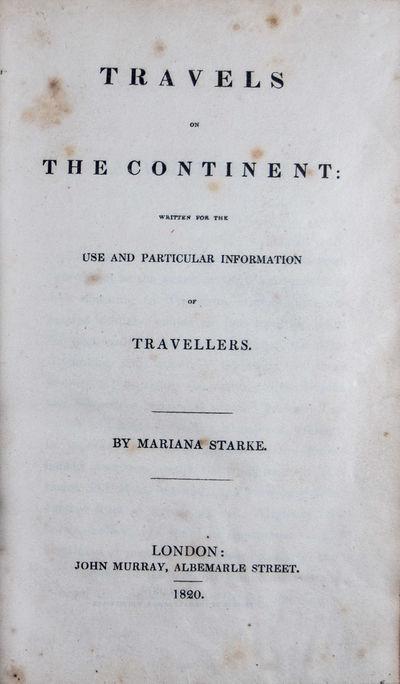 by Starke, Mariana
London: John Murray, 1820. First edition. Hardcover. g to vg. Octavo. xi, 545, (1) 300pp. Bound in contemporary three-quarter calf over marbled bards, rebacked with original gilt lettered spine laid down; raised bands. Marbled edges. . Mariana Starke was an Englih author who made a name for herself with her ground-breaking travel guides. When she was asked to publish a fourth edition of her "Letters from Italy" Starke decided to revisit the continent and create this new work. Starke spent two years from May 1817 to June 1819 and wrote about the changes and vast improvements on the continent from the spot, producing this extensive guide to Europe for travelers, based on her own experience revisiting the continent after the peace of 1814 that concluded the Napoleonic Wars. An advertisement at front spells out a stark warning to travelers due to "disbanded soldiers, converted into banditti, infesting the post-roads of the south of France, the Alps, Apennine, and countries bordering on those mountains; especially the confines of the Roman and Neapolitan territories situated between Terracina and Mola-di-gaeta..." Starke's guides are considered groundbreaking for the genre, including, next to the common architectural and scenic descriptions, advice on luggage, obtaining passports, the cost of food and accommodations, hence the extensive appendix, and advised a system of exclamation mark ratings !!!, a forerunner of today's stars. Contains 300 pages with extensive appendix, alphabetical list of towns, rivers, gulfs, islands, etc. and index at rear. Binding with light wear along edges, small chips and very light fraying with rebacked spine darkened. Contemporary inked notes in margins of pages 171, here some underlining, and 356, light sporadic foxing and water staining, visible only in some parts at lower right corner around the center of the book and spine. Binding in overall good, interior in good to very good condition. (Inventory #: 46159)
$1500.00 add to cart or Buy Direct from
Eric Chaim Kline Bookseller
Share this item